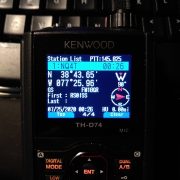 What if I told you that even without any astronauts actively working a radio and making contacts, there was still a reason to point your antenna at the sky when the ISS passes over and throw some RF at it? Well, it’s true, and it’s nowhere near as difficult to accomplish as you might think; in fact the last two nights in a row I’ve successfully sent a radio signal up to the ISS and gotten one in return. How? I’ll tell you! There are a number of objects in orbit that we as amateur operators can actually transmit to. There are a number of low-powered satellites of various modes you can talk through, but the ISS is the most well known of LEO (low earth orbit) objects for obvious reasons; just about everyone knows what it is! While being… Read more » 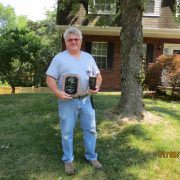 Happy birthday to our club members celebrating another year this month –  Jack, KN4HHQ; Steve, KB4OF; Ken, WB4ZOH; Philip, KI4WCC; Jeff, KM4FTK; George, K4GVT; Sandy, KM4JUS; Rosalie, KN4ZLY; Dwight, N4GSD; Mary, KK4GOW; Jeff, K9VEG; Richard, KJ4ZIH and Luther, WA3FMO. Hope everyone found a way to celebrate his or her special day! Very happy to announce we have a new member of the Heartney clan, Ben was born on June 19th to Elizabeth, KG4TVM & Nick, KG7SOM.  They live near Seattle, so if all goes well we will see them in August. Way back in February, we had our last in person club meeting and it was the elections of officers.  My intention was to present a plaque to Byron, AK4XR at the March meeting for his service as club president for 2 years.  Also, I had engraved travel mugs for… Read more » 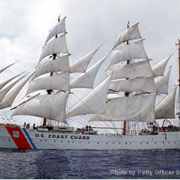 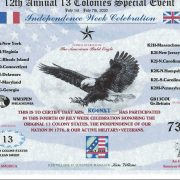 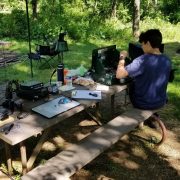 My son and I set up a portable operation at Loft Mountain Campground for ARRL Field Day 2020 [FM08PF]. We operated solar/battery powered on 6M/40M SSB S&P, and on VHF/UHF FM Phone. We operated Sat from 6pm to 1030pm EST (shutdown to observe quiet hours), and on Sunday from about 11am to 3pm EST. We logged 64 QSO’s, all voice. The weather was beautiful, especially in the evening when temperatures were 55-60 degrees F overnight with a light 5-10mph breeze. If only we could have brought some of that evening weather back in a jar! The closest storm was north of us in Luray, VA (~30m north). The campground did not have online reservations, we went very early Friday to get a site (first come, first served) and by 1130am the campground was Full for Friday/Saturday. My Tundra pickup truck… Read more » 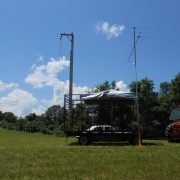