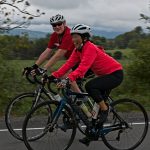 The Serve Our Willing Warriors bike ride used ham radio for its communications.   The ham radio part was organized by Andy, KJ4MPT and included both OVH and Woodbridge Wireless members.  This was actually a 3 in 1 bike ride — there were courses for 58 miles,  30 miles and 13 miles.  The OVH members helping included Andy, KM4MPT;  John, KG4NXT;  Ron, K3FR;  Byron, AK4XR; Jay, NQ4T;  David, KG4GIY; Greg, KM4CCG; Ray, KM4EKR; and Sandy, KM4JUS. The rest stops were manned by  fire department EMTs from several jurisdictions while the water and snacks were provided by a Fairfax church. Ron, K3FR described his experience as follows: “I was on the course as the ham radio operator at checkpoint ROMEO-11 (St Louis Rd and Foxcroft Rd) in southern Loudoun County, so all … Read more >> 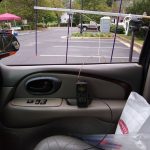 Outside of things like packets bouncing off the ISS, APRS does have a legitimate use other than just playing around with packet. In fact, one of the original uses of APRS by it’s designer, Bob Bruninga, while a research engineer at the USNaval Academy in the 80s, was for plotting the positions of naval ships over HF. He later developed a more advanced version for tracking horses during a 100 mile endurance run. Of course, this was long before the use of GPS that allowed even more accurate position reporting along with automated beaconing. For the SOWW race, there was some very limited APRS usage; a few of the Nam Knights had APRS trackers placed on their motorcycles. The location of our race was quite rural, and there was question … Read more >> 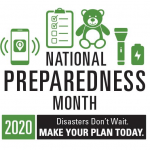 WB6UIE   As we begin National Preparedness Month, Hurricane Laura has devastated portions of Louisiana and spawned systems of severe storms as it swept inland. Northern Virginia was fortunate to escape most of its wrath. We may not be so lucky next time. Now is a good time to check your emergency supplies. Do you have enough food and water for you and your family to last several days?   You can find information about recommended emergency kit contents at https://www.ready.gov Are your radios ready to go and programmed with local repeater frequencies? You can find this info along with the local ARES op plan and training schedule at http://pwcares.org/ In addition to the damage caused by their high winds and wind driven water, hurricanes often spawn tornadoes and systems … Read more >> 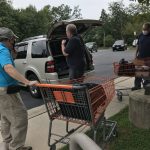 The year 2020 has been one strange year. There’ve been times when I thought “up” must be “down” and “left” must be “right”. This is the only way I (“The Other Ken” – KN4DD) could explain to myself how a mostly respiratory disease could cause toilet paper, frozen pizza and bread yeast shortages. And, as I would soon find out, laptop shortages. When I received a broadcast email from John (KG4NXT) back on August 22, asking for ideas on what to do with newly retired XP laptops, I didn’t think I could help. At first, all I could offer was this: maybe some recycler would offer money for the scrap. And so, with the trap set, John sprung it. Would you look into this please? Based on what turned out … Read more >>