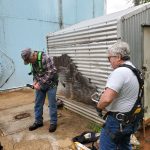 Ken, Ke2n had determined that our old 2 meter repeater antenna had severe problems after a lot of rain. He ordered a new antenna but had a stroke before he was able to install it.
Ken asked for members to come install it. The team consisted of Byron, AK4XR; Gil, KM4OZH; Al, KB4BHB; John, KG4NXT; Jeff, WB4TT and Cat, KM4PBD. Byron had previously climbed the water tower at Mount Pone.
The first climb was cancelled because of a death on Byron’s family. On the second attempt, there was some sprinkles in the morning but the climb went on. Cat was unable to help because of work.
The antenna was replaced on May 12, 2022 in a job that lasted from 10:30 AM to 3:30 PM. The only lunch we had was crackers that Byron happened to have. After Byron and Gil were on the tower, they decided the existing clamps were not heavy-duty enough. Gil had a set at home so he climbed down and went home. While there, he removed rust, put the bolts thru a die, painted them and the paint dried as he drove them back to Mount Pone.
Ken is due to be released from rehab on May 12. Jeff will drive the old antenna to Ken’s house on Bull Run mountain for a post mortem on the old antenna.