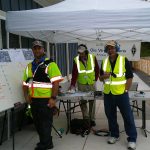 On Sunday Sept 30, 2018,  the OVH did communications support for the Prince William Half Marathon for the third time.  This time the marathon had 1400 runners and also had 500 additional runners for a 5 k race.   The  5 K race was a race within a race.   They start after the Marathon runners had left and only did a portion of the course.   The OVH was well represented by 18 members.   Only one member did not show and that was because of illness.   This represents almost 20% of the club.

The event ran smoothly and was chaired by Wayne, N7QLK.   The three net controls kept a white board of race progress.   This included the current locations of 1st male runner,  1st female runner and the last runner.   This helped the marathon managers run the event.    Also,  one runner needed medical assistance.    Eric ( KN4PJL) at the net control station went to the first aid tent and convinced one of them to follow him to the runner.   They soon arrived in a  golf cart type vehicle.   All was taken care of.   We should also mention that all the OVH volunteers  worked smoothly with the police at their posts.

On a lighter note,  a number of the runners ‘high fived’ the OVH volunteers.   One female runner that high fived John (KG4NXT) had a tshirt that read “I hurt all over and I am dying”.

The roll of honor for our members is as follows: