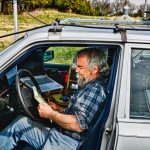 This is a collection of stories and photos of OVH members during the QSO party.   We do not have all of the stories.  If you would like your story to be added, please e-mail it to KG4NXT@ARRL.NET.

First , our two oldest members operated together. Al, KB4BHB, and Chick, KC1PIA, operated from Al’s house using a 100 watt 2m amp and HF random wire. These guys were both born in 1933 and did a fine job.

Next,  John, KG4NXT, and Theresa operated from a state park cabin at Lake Anna.  John  managed to forget a jumper with pl-259 connectors on both ends. He did have a coax with one pl-259.   He managed a field expedient for the other end – see photo below.   John operated Digital on JS8 mode and submitted a digital log – no digital logs were submitted last year.

Cat, KM4PBD, operated mobile until her batteries gave out.  She operated from the top of a parking garage (great antenna height)  and managed to scrape her car top antenna as she entered the parking garage.   Video of Cat in the parking garage  Cat worked from 9 separate counties or independent cities, which is a bonus of 900 points.

Ron, K3FR,  worked  Gil, KM4OZH, on 2m and asked him where he was operating from. Gil responded with which park he was at and Ron showed up and took some pictures of Gil operating mobile.    Thanks Ron.

Gil is a machine shop owner and operator and makes all of his own antennas.  This is his second year of all out preparation for the QSO party.  The antenna mounts are also made by him.  Gil also created a very impressive mobile shack in his car , complete with shelves and a logging computer, as well as many radios.  Gil planned his mobile route in advance, however midnight on Saturday came a few counties too soon.  Gil returned on Sunday and worked many OVH members.