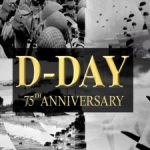 June is shaping up to be a busy month
for club activities. We’ll have Hamfest,
Field Day, and the Warrior Bike for the
SOWW veterans charity.
Speaking of veterans, this month also
marks another milestone, the 75th anniversary
of the D-Day landing at Normandy. Imagine what
it must to have been like to maintain radio
communications during the utter chaos as the
first waves hit the beaches. Lets take a look
at two radios which played an important role

in bringing tactical comms to D-Day.
U.S. ground forces found themselves on the
eve of WWII with large HF manual Morse radios
for headquarters elements, but nothing
portable enough for the company or squad
level. After several R&D efforts, the winning
bid went to Galvin Industries, a manufacturer
of car and police radios. Galvin’s design, the
SCR-536, became the first production handheld
tactical radio. It provided 300mW of AM voice
on a single crystal controlled channel in the
3.5-6 MHz band. Range varied from a few
hundred feet to about a mile, depending on
terrain.
SCR-536 saw wide use among among airborne

units and others needing maximum portability.
However, its AM modulation suffered from
vehicle ignition noise and the operator
couldn’t change frequencies. Our soldiers
needed something with longer range, noise
immunity, and frequency flexibility.
Galvin again submitted the winning bid,
this time convincing the military to go with
the noise resistant FM used in its police
radio line. The acceptance test wowed its
audience with its noise immunity and advanced
features, including a crystal calibrator and
operator selectable channels at 200KHz

intervals in the 40-48 MHz band. Christened SCR-300 by the Signal
Corps,the new backpack radio first saw action on the beach at Anzio
and went on to perform well at Normandy and the Battle of the Bulge.
SCR-300’s improved capability did come with a few tradeoffs. Its
vacuum tube design weighed about 35 pounds and had a healthy appetite
for batteries. And its operators soon learned a truism that carries over
to today’s troops. Somehow the guy with the antenna usually draws a lot
more small arms fire than anybody else ..
After the war, Galvin Industries went on to pioneer still more radio
communications firsts, including the cellular telephone. Along the way,
the company changed its name to the more familiar one of today – Motorola.