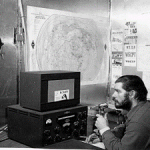 With the event filled months behind
us, we slide into the slower days of
summer and a sweltering heat wave. HF
propagation is at its worst in many
years. If the low sunspot blues have
you down, check out six meters. There
have been a number of afternoon
sporadic E openings as far as the
midwest and southern Florida.

Time for a virtual cool down as we explore the
exceptional contributions of a young ham named Art
to several polar expeditions and to the field of
HF radio communications. Born in 1909, Art took an
early interest in emerging wireless technology.
Licensed at the age of 14, he assembled his own
station in the attic of his family’s midwestern
home.

Art first gained the attention of polar explorers
during the McMillan expedition to Greenland in 1925.
Knowledge of propagation was limited then and the
expedition was unable to terminate with the Navy’s radio
station in Washington, DC as planned. Art was able
to copy their transmissions at his home station in
Iowa and walked them up the street to the

telegraph office for relay to DC. A member
of that expedition, Richard Byrd, would years later remember Art when he needed radio equipment for his own polar expeditions.
As Art’s technical skills progressed, he
recognized one problem plaguing the day’s new vacuum tube HF radios – frequency stability.
He began building crystal controlled
transmitters by hand and advertising them in
QST. Demand soon grew and by 1931 Arthur
Collins had his first factory in the basement
of his Cedar Rapids, Iowa home.

When the Byrd Antarctic expedition of the
1930s planned its communications, Collins
equipment was specified throughout for both
mobile and fixed stations. The first gear was
carried across the ice by dog sled to the
outpost which became known as Little America.
In the decades which followed, Collins gear
continued to provide reliable comms for
scientists wintering over in Antarctica. I
can still remember the thrill of my QSO with
KC4USA in the 70s.
Collins Radio continued on to still more
firsts, and became known for its reliable line
of HF SSB radios. Arthur Collins died in 1987, leaving behind a proud
legacy of quality, reliability and innovation.