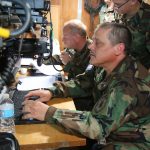 of spring like weather and the ionosphere
is teasing us with occasional HF openings
into Europe and hopes for an increase in
the sunspot number.

Speaking of HF, this spring marks another
anniversary in radio history.

led a flight of several aircraft half way around
the world while maintaining continuous HF
SSB communications with several Strategic
Air Command (SAC) ground stations. Why? As
commander of SAC’s newly minted nuclear
bomber force, LeMay needed a way to
guarantee continuous command and control of
his forces. Smaller fuselage designs of
faster jet bombers meant smaller crews and
no room for a Morse operator. AM’s noise
vulnerability and poor talk power weren’t
going to hack it. What to do?

improvement in efficiency and talk power
over AM, and had been in use on some
transatlantic telephone circuits since
the 1930s. But its equipment occupied
entire racks and needed special care and
feeding. As any ham can testify, it
doesn’t take many Hz of drift before
Donald Duck comes out of the speaker.
Could a compact and stable SSB radio be
developed for mobile platforms?
Shortly after WWII, Collins Radio
introduced a desktop size SSB station for
hams. LeMay and his deputy, General
Griswold, met with Art Collins to see if
this setup might be modified for an airborne demo. Collins responded by
installing 75A4 receivers and matching transmitters in several SAC aircraft. A series of landmark demo flights spanning much of the globe
soon followed, silencing the harshest of skeptics and leading the way
to a new HF command and control system for SAC. So …what did these
three, LeMay, Griswold, and Collins, have in common besides being
forward thinkers? Answer: They were all hams.

Fast forward to today where nearly all of the old HF links have been
replaced by satcom. Its wider bandwidths and freedom from sunspot cycles
were viewed as an improvement over HF. Recently, several potential
adversaries have demonstrated potent anti satellite capability, leading
DoD to revive HF as a backup. With most of their traditional HF
operators long gone, where can our military turn to restart HF training?
The answer? Hams of course (right).

The Virginia Defense Force (VDF) is
an auxiliary of the Virginia National
Guard. They assist the Guard with
functions like traffic control and
communications, and, should the Guard
be federalized, remain available to
provide public safety functions. VDF
has several command center trailers
with HF radios and has contacted us
regarding operator training.

Join your fellow OVH members for the Virginia QSO party on 21-22 March.

Join us at our March meeting for a presentation by Major Jim Stanley of the Virginia Defense Force.

And remember, our March meeting has been moved from the usual Tuesday to Wednesday 18 March due to a scheduling conflict.

Hope to see you there!