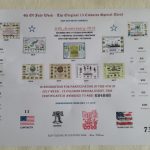 The 13 Colonies special event is a contest for hams to contact special event stations in each of the 13 colonies.   Appropriately, the contest ran from July 1 to July 7 , which includes Independence Day.    Each state has a special 1 by 1 call.  For example,  Virginia was K2B.  The idea is to contact all 13 stations for a ‘sweep’.   The contest is on all bands  and all modes.  This was the 10th year the contest has run.

For the Olde Virginia Hams,  the first known sweep was by Gil KM4OZH, who finished his in two days.   Other OVH members participating were Al, KB4BHB,   Wayne , N7QLK,  John,  KG4NXT, and David, KK4ZUU.   If  any one was missed,  contact KG4NXT  and we will correct the web article.   We should note that we are in good position to work this contest in Virginia since we are  approximately in the middle of all 13 original colonies.

Below you will see the 2018 13 Colonies Certificate for Al, KB4BHB.   You see the colonies he worked and also see that he worked a bonus station WM3PEN, which is represented by the Liberty Bell icon at the bottom of the certificate. The flag icon tells us that Al is a military veteran.

We owe special thanks to David,  KK4ZUU,  who operated as one of the Virginia colony stations,  K2B.    David has always made an exceptional effort to help any OVH member that needed K2B.   He has been available for 2 Meter FM contacts for technicians who wish to participate.  David loves to work digital and in 2017 was the first station to offer JT-65 contacts for the 13 colonies event.  This year , he did FT8.  Thanks David.

Below you can see David’s impromptu 80 meter antenna that he used for the 13 colonies event.   It was made of a mobile Hustler SS three foot rod, a Hustler 80m high power coil (for bandwidth, later use), and about 30ft 18ga bare copper wire and ldg Auto tuner.