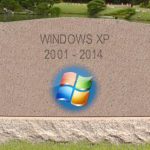 The old XP loggers are gone ! We now have windows 10 laptops with solid state drives and the latest N3FJP field day software. This is being done at no cost to the club. Jim O’Rourke, KM4SXM, donated the first laptop. John, KG4NXT, donated the second one. Don, WA2SWX, donated 3 laptops. Our club has a comprehensive license on the N3FJP software so that was updated at no cost. 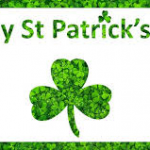 Very happy birthday wishes to Fred N3KVV, Scott KM4FTD, Gary K4MRL and Jeff N1SN Congratulations and best wishes to Steve N4OGR and Jan KE4TMW as he recovers from his heart transplant.  Please keep them both in your thoughts as Steve continues to recover. Condolences to the families of Dave W4HRR and Jimmy WA2QEJ.  Both gentlemen passed away at the beginning of February. VIRGINIA QSO Party is Saturday March 16th and Sunday, March 17th.  Please remember to turn in your log for this event and list the OVH as your club.   Hope to hear you on the air! Vienna Hamfest is the last weekend in March; hope to see many OVH members there.   We will have a club table set up, please stop by and say Hello! Hamfest meetings are well under way, contact … Read more >>

This has been quite a mind expanding week as I listened to John describe his favorite new digital mode, JS8. It runs on a laptop computer and manages to copy at subterranean signal to noise ratios. Wow, how does that work? And how did we get here? The journey leading to seemingly magical modes like JS8 began shortly after World War I as growing demands for commercial and government communications rapidly exceeded the capacity of manual telegraph circuits. A small group of clever inventors proposed a solution known as a “printing telegraph” or teleprinter. Its electromechanical keyboard and printer combination used a 5 bit Baudot code to represent 64 possible alphanumeric characters. Their invention was a resounding success and their company, the Teletype Corporation, went on to become a major … Read more >> 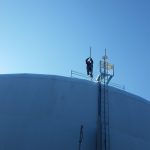 Our repeater committee decided to replace the 2 meter repeater antenna to fix the noise problems that have occured when there is a lot of precipitation.  Ken, KE2N, had run a separate transmit antenna and the results appear to validate the theory that the antenna was the problem. When the new antenna arrived, it was decided to do an immediate installation because of national weather service warnings of a storm the next day.   With only a few hours notice,  Ken had a team of 4 club members :  Byron, AK4XR,  Gil, KM4OZH, John,  KG4NXT,  and Ken himself.    The team arrived and installed the antenna without notable problems.   Byron ,who learned safe tower climbing in Iraq,   climbed the tower and installed the antenna with the rest of the team as … Read more >>