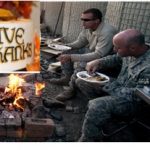 The approaching holiday season and year’s end are traditionally a time for reflection and giving thanks for our many blessings. This Veterans Day, let’s take a moment to express thanks to our veterans – the young ones who are in harm’s way today defending our freedoms, and those who have gone before, sometimes giving all.

I know my fellow vets and I have had those occasional days when we felt like just a small cog in a big machine and wondered if we were making a difference.

In honor of Veterans Day, here’s a story about a young service member who made a difference by using his ham radio skills as a springboard to help create one of America’s WWII war winning capabilities.

Young Radioman Harry Kidder took an interest in ham radio while stationed with the U.S. Navy in the Philippines from 1914-25. Using equipment he built himself, he began working DX as 1HK. As he listened to the HF spectrum, Harry began hearing what sounded like Morse code, but with extra characters he didn’t recognize. By correlating strong signals with known ship sightings, Harry soon realized that he had stumbled upon Japanese Navy communications.

With much effort and some help from a shipmate’s Japanese wife,  Harry learned the Japanese character set and correlated it with what he was hearing.[1]
As Harry’s Japanese Morse skills grew, he was able to copy traffic from major naval exercises and suggested to his chain of command that such intercept might have intelligence value. That earned him a set of orders back to the States, and, worse yet, to Washington, DC.

Dismay with the new orders evaporated as Harry was called into the intel spaces and read into a program known to very few people at that time. He was to stand up a school house to train Navy and Marine Corps operators to copy Japanese naval communications.

Needing a secure space with easy antenna access, Harry had a concrete block house built on top of the Navy Department building on Constitution Avenue. His graduates, some recruited from the ranks of active duty hams, became known as the “On The Roof Gang”. They went on to operate a number of intercept and DF sites quietly installed across the Pacific to monitor the expanding Japanese empire. Intercept from these sites fed the voracious cryptanalysis effort against Japanese naval systems. Success against those systems played a pivotal role at Midway, the Yamamoto shootdown and numerous other victories in the
Pacific war.

Harry Kidder retired as a Chief Petty Officer in 1942. This year he was one of four people inducted into the NSA Cryptologic Hall of Honor.[2]

2. Four Cryptologic Giants will be Inducted into the Cryptologic Hall of Honor
https://www.nsa.gov/News-Features/News-Stories/Article-View/Article/1916180/four-cryptologic-giants-will-be-inducted-into-the-cryptologic-hall-of-honor/