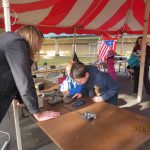 On October 19,  OVH supported the JOTA event at Camp Snyder in Haymarket.   Modes included: DStar, 2 meter FM,  FT8,   HF SSB and  QRP SSB on a loop.   Scouts contacted Germany, France, Portugal and Belgium as well as many stations in the U.S.   We also had an oscilloscope on display and morse code keys with sound for the scouts.

Duane, KK4BZ,  was on horseback in the battle field and worked many of our scouts on 2 meters.   We do not get a lot of horseback mobiles !