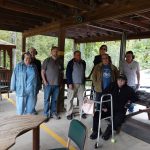 On October 14, 2019,  a number of club members went target shooting together at the Fairfax Rod and Gun Club.  Since this club is only open to members and guests,  two OVH members who are also gun club members sponsored the rest of us as guests.  Thanks very much George, K4GVT and Phil, AC4PL.   The event was thought up and organized by Cat, KM4PBD.

George, K4GVT, brought his tracking point rifle.   This rifle has a computer assisted sight which determines the range and computes the ballistics.   The rifle fires when it has a solution on the selected target.   In addition, a second person can see what the shooter sees by linking the rifle to an iPad.