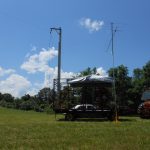 Wayne, N4HCR, wrote an article on field day that was published on the forbes website.  This is the link to it:    https://www.forbes.com/sites/waynerash/2020/06/30/thousands-of-radio-operators-band-together-to-practice-for-the-worst/

There was a lot of digital operating this year. Three of us did FT8 with auto logging: Wayne, N7QLK; John, KG4NXT and Bill, N4SV. Mark, WA4KFZ worked both Wayne and John and sent us pictures of the contacts.

We did not have GOTA but Cat, KM4PBD brought her brother Austen to KG4NXT where he did some digital contacts and also assembled a satellite antenna as shown in the picture.

Gil, KM4OZH was haying at the farm he owns with his brother and could not start operating until 10 pm. He put a ladder on the hay wagon and it supported an inverted V antenna loaned to him by Jeff, WB4TT. He worked from then until one minute before the contest ended on Sunday. When it rained on Sunday, he put a tarp over the equipment and continued.