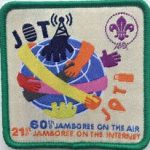 The event was organized by John Heartney, KG4NXT, along with Ken Carpenter, KD6DBX, with Troop 581 of National Capital Area Council of the Boy Scouts of America.

It was a perfect fall day, lots of sunshine at the Braemar Swim Club. Antennas went up, radios were tuned up and contacts were made between 9 am and 2 pm.

John KG4NXT set up his ICOM 756Pro with a windom antenna. Don WA2SWX set up a DSTAR station.

Wayne N7QLK and Kevin KX4KU worked with the scouts. Everyone did an outstanding job getting these scouts on the air. Gil KM4OZH was traveling but was able to have QSO’s on 2-meters with his home-made mobile antenna from Amissville.

The scout leaders had several laptops arranged on a table so the kids could participate in JOTI – Jamboree On The Internet and they also had a 2-meter station set up.

Lunch was served around noon and I do not think anybody left hungry.

Everyone did an outstanding job getting these scouts on the air. Several of the boys and some of the parents really enjoyed this interaction and I think they would have stayed all day.