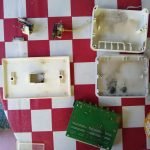 As a ham, we know lightning is our enemy. These big powerful bursts of static electricity can carry a lot of voltage, almost as much current, and is the absolute enemy for our antennas, our electrical supply, and the equipment connected to both. In most cases, many of us will never see a direct lightning strike; and I’m glad to say I’m still technically part of that club. But on the evening of September 2nd; I found out just how destructive an indirect lightning strike can be.

Thunder had been booming for quite a while and it was getting further and further away when it happened; a super bright flash, a loud boom, and a house that shook like an earthquake (actually, it shook more than the earthquake.) The power immediately went out and everyone wondered what happened. I went outside and saw the power lines shaking like crazy when I got a glimpse of what had happened. About 130 ft away from the corner of the house, a Poplar tree became the target lightning; at least half of it. At some point the tree had decided to split and send two very tall trunks up from it’s base.

The upper 40 or 50 ft of this trunk that got hit was just gone; it was spread out in a radius of almost 200 feet. From little shards of wood to 30ft long chunks of tree; the instant vaporization of all the moisture in this tree literally created a bomb. The tree itself was almost split all the way through! In fact at the right angle you can see through it. Miraculously all of this managed to miss the house; despite the fact pieces landed just inches from crashing through an exterior wall and some even landed in the backyard; we’re not clear if their path was over the roof or some other direction.

Needless to say, there were bits of tree in places and distances that make you wonder just what happened. However the damage wasn’t just from exploded everywhere; some of our electronic equipment took some very strange damage.

To put your worries to rest; no radio equipment was harmed in this strike. In fact, the HF antenna that’s been hanging idly in the tree shows absolutely no signs of damage. It’s still in the tree, it’s twin-lead is still perfectly intact, the ends of it’s disconnected feedline showed signs of arcing, and it was still receiving on my SDR just fine. It’s been almost two weeks and I can only guess that my damage was in fact surge related; but this surge did not come from where you might expect. Had the surge gotten into my electrical system, I would have expected everything in the house to have gotten blown up. But while some of the damage was clear where the surge got in; some of it doesn’t make any logical sense.

For starters, it seems most of my damage came in through my Ethernet network. In the shack; the Cat5E jack in the wall was missing and the network switch had literally blown it’s cheap plastic case. The desktop computer and laptop computer plugged in to that switch are no longer functional; in fact the laptop looks like it tried to blow it’s keyboard completely off. Both ends of the Ethernet run to the shack were horribly burned. While an external hard drive did survive; it’s switching power supply did not. The GFCI outlet the laptop was plugged in to no longer functions and is covered with burn marks; but the vintage stereo amplifier that was plugged in to the same outlet only suffered a damaged AC plug. The laptop’s power supply seems to have literally exploded; I found the insides lying on the floor having freed itself from both the AC and DC wires, and it’s plastic housing nowhere in sight. While I’ll admit to not having the laptop plugged in to a surge protector; the rest of my equipment in the shack was and that surge protector clearly indicates it’s protection is still good. Tearing it open, I found the usual Metal-Oxide Varistor protection setup; which was still completely intact.

Inside the house, the internet router for my Verizon FiOS had attempted to blow it’s case apart and one of it’s ethernet jacks was badly burned. Not only did it have to be replaced; but the outside unit that converts the fiber connection in to it’s various copper ones (also called an Optical Network Terminal) also had to be replaced. On the second floor of the house, a laptop computer and another networking appliance also failed; which is strange because the rest of the networked devices survived, including a wireless access point and switch. I am leaning more toward the fact that while this wasn’t a direct strike; the EM Field was enough to induce currents in outdoor wiring; or as someone told me, surge from the lightning could have tried to distribute itself in the ground itself.

The reason I think this is because of some of the more bizarre things that occured. In addition to the main 200A breaker for the house triggering, any and all breakers to outside runs had popped; including the breakers for our well and septic system. One idea I was told was that in that brief moment my ground was no longer ground; everything tried to dump the surge back in to the grid, causing all those breakers to trip. Also of note is the fact that just about every other electrical appliance survived. Both the well and septic pumps are functioning, the AC/heat-pump is still functional, refrigerators, stoves, microwaves, even all of the televisions survived. Since all of that stuff still works, and none of their surge protectors show damage; I don’t think this came directly into the electrical system. In fact, I couldn’t find any burn marks behind my electrical panel or in any of the wiring I was able to inspect.

Further evidence of this can be found from a few other pieces of damage we’ve discovered. Our security camera system; which was in fact connected to the same network switch as the one laptop in the house that failed; no longer functions. It’s power supply too had blown apart; but most of the damage appears to have come from the output side of the supply. Outside, on the corner of the house closest to the strike; the siding shows burn marks from an obvious arc from the camera wiring. Not to each other mind you, but it looks like the power and video arced to the vinyl siding of the house. The outdoor security light mounted just next to the camera still works.

There was also an oddity where some devices not even connected to a supply got blown up. We have a number of small decorative LEDs mounted around the porch and walk-ways; low voltage (12V) wiring in the ground ran down to the shack where it’s power supply was mounted. While I had disconnected it’s power supply years ago due to RFI; every single one of these LEDs are now completely black inside, some blew apart; and the wiring in some spots vaporized; literally blowing holes in the ground. The wires did get blown from the DC output of the supply; but the supply’s AC side wasn’t connected to anything. I see no evidence of a big flash coming from the power supply.

One of the more bizarre events was the grid that supports the drop-ceiling tiles in our basement became electrified; there are places between pieces that show burns; an exceptionally large gap next to a wall left an arc-flash on the wall itself. One of the in-ceiling fluorescent lights were also lost; with the inside of the fixture showing massive arcing through a bulb and it’s light switch was burned and non-functional. Nothing else on that circuit is blown; so I don’t think it was the light that energized the ceiling grid. Instead, I believe it was an unused electrical run to an outside outlet that was less than 20ft away from the strike zone that somehow got current in. The Romex where it enters the basement is burned and all three lines are severely pitted; not to mention that outlet got blown entirely out of it’s outside enclosure. Again, this outlet wasn’t connected to the house anymore; it’s disconnected wire seemed to be close enough to the ceiling structure that the surge found its way.

At least…that’s the theory I’m going with.

It’s been a very strange and slightly stressful experience. Granted within a few days, everything here was largely back to normal after Verizon restored our services and I found temporary replacements for some of my lost equipment; to me things look more and more like it was just proximity to the strike that did me in. But I’m not going to stand around all day and keep questioning what I could have done. Had my electrical panel blown up and every run in the house burnt; I probably would. But so much of the damage looks like it was just induced currents in wires that managed to do some damage on the “other side” of any surge protection I had; or found disconnected devices to find a way in. It does make me question and respect lightning a little more than I did before. But I don’t think this was your “average” strike. You don’t need to take a direct strike to take damage, you just need to be close enough to one.