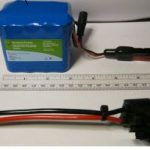 If you’ve joined us in supporting
Tri It Now and larger events, you’ve
probably realized that the medium power
setting on your HT (typically around
2 Watts)isn’t quite enough to provide
reliable comms over the entire course.
This is especially true if you’re using
the short ducky antenna which came with
it. How to improve coverage?
Going with a larger antenna and/or
adding a “tiger tail” counterpoise is
one solution. Bill, K5AE has an

excellent video on the topic at
tiger tail tail video
Or, you can up the power to 5 watts.
This usually means buying a larger
battery for your HT if you want a
useful amount of talk time. If you’ve
tried that option, here’s hoping you’ve
had better luck than I did. Most of my my Li and NiMH choices seldom lived up to their advertised capacity and usually developed memory and other antisocial behaviors shortly after purchase …
Lithium Iron Phosphate (LiFePO4) is relatively new addition to the ham
radio battery market. It offers over twice the energy density at a fraction of the weight of a comparable gel cell.
And, it retains charge over long periods and has no memory effect. The tradeoff? LiFePO4’s cost several times as much as a gel cell of the same capacity.
Until recently, LiFePO4’s were offered primarily as drop in
replacements for lead acid batteries. Bioenno, does offer a line of mini 12 volt LiFePO4’s via Ham Radio Outlet. I chose the 4.5 Ah model (above right), added a fused cable, and put it in my MOLLE
vest pouch just below my HT. Adding a short cable to the HT’s Ext 12v port and a headset provides a hands free 5 Watt setup with hours of talk time.
The first on air test went well. I had no trouble reaching all stations on
the Tri It Now course from inside the pool area.