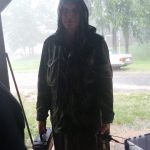 As field day approached,  all eyes were on the weather forecasts  and the forecasts were not good.    On Friday, the rain let up about 1 pm but started again when we gathered at the park to slingshot lines for the antennas.   We proceeded and got all the lines shot with the loss of only two weights,   The rain actually helped a bit here because the  school kids at the site stayed under the pavilion which made it safe for some of the near shots.

As we gathered Saturday morning for setup,  the rain held off for a time.   We had another challenge since Bill South, N4SV, had always setup and configured the logging computers and no one else had.   Byron, AK4XR, took the task on and had them all working and logging to the server.  Bill , who is in Indiana,  contacted us at the site on the 2 meter repeater using the web app to connect to the repeater from Indiana.  He confirmed that we had it set up right.

We started at 2PM with all the antennas up.   As we made steady progress,  our ARRL guests arrived.   Jim, N2ZZ and Bill, N2COP are the Director and Vice Director of the 4 state Roanoak division.    They talked to many people and had a gourmet bbq meal provided by Chef Phi, AC4PL.   Everyone there had a fine meal.   The ARRL guys loved the brisket and other dishes.

As Dinner wound down,  the fox was placed  and activated.    As I announced the frequencies, the heavens opened up with a spectacular downpour.    The wind was blowing the rain inside of the pavilion and we shut down all the hf stations.   The storm blew over Theresa’s tent and it went out of sight into the woods.   The fox was in a waterproof plastic box and kept broad casting.   Cat, KM4PBD, got her rain gear on and went out to chase the fox.   She found it and brought it back !   She used a club Yagi to direction find.

Tony, KM4KLB, got us 200 points by passing National traffic  system traffic to our section manager and 10 other persons.   This was not easy.

Sunday was much kinder.   Phil cooked us a great breakfast and we continued to operate but started to pack around noon because there was another storm in the forecast for 3pm.

The log was submitted via the web app the next day.

See you next year.