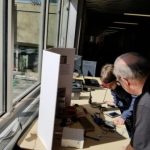 On a weekend already busy with Virginia QSO party and Winterfest,   the OVH also presented “Amateur Radio in the Maker Spirit”.   The Faire included such exhibits as telescope making, The Thomas Jefferson Group making a cubesat and high power rocket stabilization.  see more at https://nova.makerfaire.com/makers-exhibitors-2018/

Our exhibit was well received and we had lots of visitors.   We allowed hands on operation of the SDR  radio, the Fox transmitter and the 7610.    When we showed one pair of high school boys the SDR with Bencher Key,  one of them whipped out his phone and gota morse code table and went at it.   It helped that the SDR radio decodes the morse it is sending and displays the characters on the screen.  The visitors received a 3 page flyer which included the hamfest and field day flyers.   Theresa , KG4TVM,  was the author of the flyer.

The Faire treated us well and allowed us to put up a 20 meter vertical out on a deck and run coax to in that included a run in front of a little used elevator.   The event staff covered it with welcome mats.   In addition, we got 2 free box lunches.  The members helping were Don WA2SWX,  John , KG4NXT,  Theresa, KG4TVM, Sandy, KM4JUS, and Ray KM4EKR.