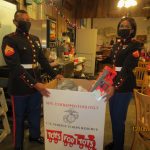 We had our annual OVH holiday party at Yorkshire restaurant on Dec 6.   Because of the virus, we wore masks when not eating.  In addition. the restaurant had blocked off every other table to help with social distancing.  We had the usual ham, turkey and venison chili for the main dish.  This year the venison was provided by Gil, KM4OZH, who had shot a 10 point buck.   There were a number of side dishes and desserts brought by OVH members.

As usual, we also collected toys for tots.  Several members that could not attend provided toys including Gene, N4HFN; Wayne, N4HCR; Sandy, KM4OZH; Ray, KM4EKR and Al, KB4BHB.   We had two marines come to eat dinner and collect the toys for the toys for tots programs.

There was a brief monthly business meeting. Theresa presented awards for Jeff, WB6UIE;  Jay, NQ4T and John, KG4NXT.  There was a motion to vote in the members read in at the November meeting and that motion passed and the meeting was adjourned.