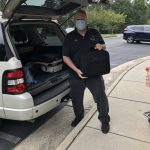 On October 27th, OVH once again stepped up for the community and donated 9 more computers.

This brings our total to 20 usable computers donated. We are not counting the 4 donated laptops that were unusable and gifted to eAsset Solutions Computer and Electronics Recycling of Falls Church.

A reminder: 11 laptops were donated by OVH to Gracing Spaces (https://www.gracingspaces.com) on August 31. They, in turn, presented those computers to Fairfax County Social Services for use by the children in their shelters.

With regard to this round, seven of those nine computers were laptops.

The remaining two computers were Windows 10 desktop machines. Theresa, KG4TVM “re-gifted” these two machines after acquiring them from a friend.

After taking delivery of the nine devices from John, KG4NXT, I once again booted all of the machines, removed any need for credentials (login & passwords), any radio related software and any personal data.

I then contacted Gracing Spaces again to see if they could use our newly sanitized computers. I was informed they no longer had a need, so I approached FACETS (http://FacetsCares.org).

I was able to speak with Allison Coles, Director of Development & Communications at FACETS, about their need for computers for this year’s Hypothermia program.

Because of OVH’s continued generosity, I was able to transfer all 9 computers to FACETS along with their attendant keyboards, monitors, power bricks & power cords.

It is because of your unselfishness and charitableness that OVH continues to make a difference in our community.