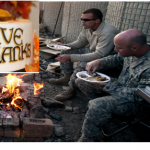 The approaching holiday season and
year’s end are traditionally a time
for reflection and giving thanks for
our many blessings. This Veteran’s
Day, lets take a moment to express
thanks to our veterans – the young
ones who are in harm’s way today
defending our freedoms, and those who
have gone before, sometimes giving
all.

American servicemembers have a proud history of being able to adapt,
innovate, and overcome during the most challenging of circumstances. This
Veteran’s Day I’ll cover a fascinating but little known part of that history
– radios built by front line combatants and prisoners of war eager for the
latest war news. Known collectively as “Foxhole Radios” their circuits
embody a unique combination of clever innovation and elegance. (“Foxhole”
refers to the fighting holes used by the GIs.)

Concerned that local oscillator radiation might give away a unit’s
position, WWII regulations forbade front line soldiers from building
vacuum tube radios. But GI innovation soon prevailed. Credit for the
original Foxhole Radio goes to Private Eldon Phelps who reportedly
assembled his prototype on the beach head at Anzio in 1944. Its circuit
is that of the simple crystal radios many of us built as youngsters. The
clever part is the use of a rusty razor blade and safety pin contact to
perform the same AM detector function as a crystal diode. Add an inductor
made from scrap wire, an antenna, and a high impedance headset and the
radio is complete.

American and Allied prisoners of war shared the same hunger for news and
soon came up with their own Foxhole Radio designs. For a moment, imagine
yourself as a WWII POW. You’re injured, on short rations, and living in
primitive conditions. How will you find parts for even a basic receiver?
And, of course, the design will be yours from memory (no references or tube
manuals). Since consequences of discovery by your captors will be severe,
your design must also be small and concealable.
The German policy of assigning POWs to work details did make the challenge
a little easier. Radio parts just seemed to disappear from the repair shop
now and then.

Japanese camps, on the other hand, were notorious for their brutality.
Those in the Philippines were among the worst. Disease and starvation were
rampant. Imagine trying to assemble a radio under those conditions. Shown
below is a clever design by a POW in one of those camps. Its one tube
regenerative circuit was concealed in a GI canteen. Stowed by day in its
canvas pouch, it looked just like any other issue canteen. At night, POWs
used it to search for news of MacArthur’s pending invasion.

Punishment for possessing a radio in one of those camps could range from
severe beatings to execution. In spite of brutal mistreatment by suspicious
guards, no one gave it up. Another reminder that freedom is not free.