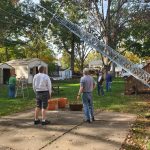 On October 20, 2020,  the OVH had an antenna party for Butch, W4HJL.   Butch has a crank down tower at his house.   On the agenda:  1) replace the rotor because control box no longer displayed direction; 2) some of the beam elements were not in same plane as the rest – straighten them; 3) add a 6 meter beam to the antenna.    The crew consisted of Gil, KM4OZH;  George, K4GVT;   George’s brother in law, Tom Schweinfurth, Dick, WN7S; Al, KB4BHB;  Bob, W4HJF and John, KG4NXT.    Butch, W4HJL, cooked us all a fine lunch.    The replacement rotor did not have mounting holes in the right place so the decision was to field repair the old rotor and grease it up.   The field repair was handled most ably by Gil.  There was a lot of banter.   At one point,  George said “I am just trying  to be as much of a wiseass as the rest of you”.  The 6 meter beam was assembled and had fine SWR on the ground but SWR rose when the tower was raised. It  will be worked on further.   Butch was pleased with the overall outcome.