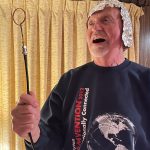 George, K4GVT has been an engineer for years and recently retired from Cisco. George found himself bored and took on some part time work from a Fortune 500 company that we can not name.

This company manufactures chips. These chips start out as silicon wafers and then are processed into chips. The manufacturing process is quite delicate and the wafers are never touched by humans as they process down the assembly line – moved by a track system.

George was told that track system was often stopping at one point in the plant. The unintended stopping point was near machines that generate plasma. George knew that the plasma was generated in a chamber using kilowatts of RF. The company has a RF sniffer and it was not registering a problem. One of the company engineers made a loop and fed it to an oscilloscope and that did not detect a problem. George got his trusty spectrum analyzer from home with a small loop as an antenna and started to sniff around the tool chambers. All of a sudden, the spectrum analyzer warned that it was INPUT OVERLOADED! George quickly put some distance between the analyzer and the RF leak. George had found the problem.

George brought this to the attention of the company and first suggested copper foil to contain the RF. The company did not have any on hand. George suggested aluminum foil be placed over the area where the leak was detected. This was a temporary measure until the tool could be taken offline. The tool in question has been performing without any issues since.

George believes his experience with Ham Radio gave him an edge over the others.