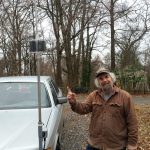 Our own Gil Thompson, KM4OZH, came in second as a Limited Rover in our Roanoke division.   The Roanoke division consists of the states of Virginia, West Virginia,  North Carolina and South Carolina.   In addition, Gil came in fifth in the Southeast Region which consists of Delta, Roanoke and Southeast Divisions of the ARRL.   You can find him listed as KM4OZH/R on page 80 of the December 2019 QST.

Gil also operated in the September VHF contest and expects to place high in that contest also.   He is adding 2M SSB capability to boost his score for the next contest.

We are all proud of Gil’s accomplishments.