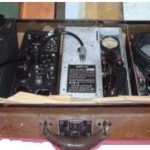 Constructed by members of the Civilian Conservation Corps in the 1930s, the park was originally designed as a getaway for inner city youth during the Great Depression. Today its rustic cabins and idyllic trails are available for all to enjoy. There is another interesting and, until recently, little known slice of the park’s history – its role as a training site for OSS operatives during WWII.

America entered WWII with no national agency responsible for coordinating intelligence and covert action. Before Pearl Harbor, such activities were conducted piecemeal by the individual military services. President Roosevelt addressed this deficiency by creating the Office of Strategic Services (OSS) under WWI Medal of Honor recipient Brigadier General William “Wild Bill” Donovan. “The basic mission of the OSS was to obtain information and to sabotage the military efforts of enemy nations during WWII.  …… The OSS specialized in dropping operatives behind enemy lines to carry out sabotage, demolition, counter propaganda, and disinformation activities. ……” [1]

Donovan’s team had its hands full standing up a brand new agency. In addition to recruiting, they needed to find secure locations to conduct training. A survey of potential sites considered several east coast locations. Prince William Forest Park with its existing cabins, dining hall, and other facilities was particularly suitable. It was conveniently close to DC, but just far enough away to remain secure in its secluded forest location.

Park ownership was transferred to OSS in 1942 and a large portion
of it became “Area C”, the school for OSS radio operators. Since most
communications from the field would be in HF manual Morse, CW
proficiency was a must. Additional courses covered basic radio
operation and maintenance, antennas and propagation, and ciphers.

Agents learned the basics of HF radio propagation as well as how to make and hide a variety of field expedient antennas (a topic no doubt familiar to those living with HOAs …).

After reviewing the large and bulky HF radios of the day, Donovan’s team realized that they would need to accomplish another first – design of a new agent radio from scratch. RCA received the contract and engineer Earl Anderson was told to complete the design on his own time since the company was already at max capacity with new wartime efforts.

Anderson responded with an elegant minimalist design with excellent flexibility. Christened SSTR-1, the new agent radio consisted of three modules – the SSP-1 power supply, SSR-1 receiver, the SST-1 transmitter. Each module was small enough to be easily concealed under a coat or  inside other every day objects (Ref [2 ] shows one hidden in a loaf of bread). They could be readily assembled into the traditional suitcase spy radio (above) and a variety of other configurations.

Key to the SSTR-1’s flexibility was its power supply. Its one small package could be configured to power the radio from 110 or 220 VAC or from a 6 volt storage battery (commonly used in automobiles of that era). It could also be used to recharge the 6 volt battery.

The SSR-1 receiver was a classic five tube superhet covering 2.7 to 17 MHz in two bands and could receive either CW or AM. It had good sensitivity, but was known to drift a bit. Its companion transmitter, SST-1, was a 6L6 crystal oscillator with an excellent output matching network for field antennas. (I can still remember making my first Novice contact using a similar transmitter.) SSTR-1 was a resounding success in the field and remained in use in various revisions throughout the war and for several years afterward.

With the war over, President Truman dissolved the OSS in 1946. That same year, Prince William Forest Park was returned to the public as a recreation area.

By 1947 the Cold War was in full swing and CIA was established as America’s national intelligence organization. This year, 2022, marks both the 75th anniversary of CIA’s founding and the 80th birthday of its predecessor, OSS. And this month on November 11th we honor the sacrifices of our nation’s veterans and take a moment to remember that freedom is not free.