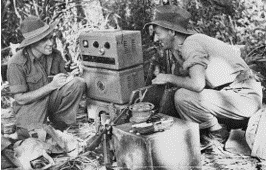 June brings sweltering heat to northern
Virginia and a chance for hams to adapt to
a new version of Field Day. This month’s
ham radio history takes us to the steaming
heat of the WWII Solomon Islands and the
story of a young ham who used every bit of
his Field Day skills to keep his gear up
and running while reporting on enemy
forces and dodging Japanese patrols. 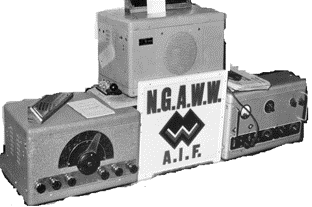 Sydney, Australia native Paul Mason became  interested in amateur radio during his school days, becoming proficient at Morse
and building his own transmitter in 1936 [1].
Thanks to his work as a plantation manager
before the war, Paul had good knowledge
of the Solomons and their inhabitants.

His background made Mason a perfect
candidate for a program set up by
Australian Naval Intelligence in 1940.
Observers, called Coastwatchers, were
stationed among the northern islands to
warn of approaching hostile forces. When
Japanese troops landed on the islands in
1942, courageous Coastwatchers packed up
their radios and melted into the jungle.

With no military radios available, Coastwatchers relied on commercial
equipment made by Australian company Amalgamated Wireless Australasia, or
AWA [2]. Their sets from the company’s Teleradio 3 series were originally
designed as base stations for remote Australian settlements. The 3BZ model
featured a tunable receiver covering 200KHz – 30MHz and a 13 watt AM/CW
crystal controlled transmitter. These, along with an antenna tuner and
speaker/power supply were housed in sturdy steel cabinets. Portable power
came from lead acid batteries and a generator to recharge them.

Coastwatchers had to minimize transmission time to evade hostile
direction finders and periodically changed location to avoid Japanese
patrols. As you can imagine, moving such a station wasn’t a small
operation. To the Coastwatchers advantage, Japanese mistreatment of the
natives guaranteed a steady supply of load bearers and antenna climbers
along with a network of scouts. Covert resupply missions by submarines
and PBY Catalina flying boats helped them endure their harsh jungle
environment.

Periodic radio reports from Coastwatchers were instrumental in helping
the Allies keep tabs on Japanese positions and troop movements and were
often timely enough to call in air strikes on vulnerable targets. Their
native networks helped rescue downed aviators as well as PT-109 survivor
and future President John F. Kennedy.

One of Paul Mason’s reports effectively turned the tide during the
battle for Guadalcanal. Hoping to catch U.S. amphibious forces at their
most vulnerable point while offloading men and supplies, the Japanese
launched a large formation of bombers. Mason spotted them enroute and
alerted U.S. forces in time to set up an ambush by carrier planes, turning
the tables on what could have been a disaster.

Arranging that ambush and several airstrikes catapulted Mason to the top
of the Japanese most wanted list. They redoubled their efforts to find him
and added dogs to some of their patrols. As his capture appeared imminent,
the Allies directed Mason to a remote portion of the coast where he was
safely extracted by submarine. Mason and several other Coastwatchers were
awarded the Distinguished Service Medal for their actions during the battle
for Guadalcanal.

So, as you hone your abilities to innovate, adapt, and overcome during
this year’s Field Day, remember Paul Mason and his jungle radio station.
And be glad that the only hostile patrols you’ll be evading will be the
mosquitoes.

2. Extracts from the VMARS News Sheet
A Publication of the Vintage Military Amateur Radio Society
https://secure.toolkitfiles.co.uk/clients/22828/sitedata/files/NS_Extracts_Jan14.pdf