Hope everyone had a safe and happy Independence Day as we celebrated our nation’s birthday. August marks another important birthday – that of the U.S. Coast Guard, tasked with protecting our shores from smugglers and terrorists. As we honor that anniversary, here’s a sea story about one of that service’s epic battles. It began 100 years ago this year with the passage of the 18th Amendment. 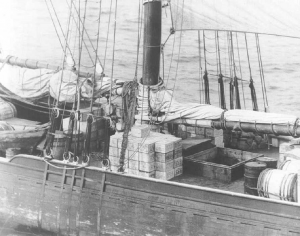 Popularly known as Prohibition,
the new law forbade the import or
manufacture of alcoholic beverages
in the U.S. Predictable results
followed its opening kickoff.
British and Canadian distilleries
ramped up to full production and
the smuggling race was on.

The Coast Guard’s task was a daunting one. 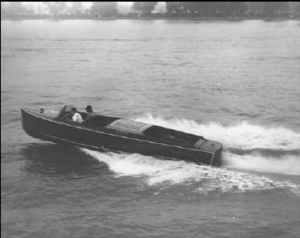 Small speedboats dashed out to the motherships to load up.

A limited number of cutters had to cover
thousands of miles of coastline.
And modern navigation aids were
virtually nonexistent. No GPS, no
LORAN, no radar … just celestial
and DR (dead reckoning). Busts were
almost a matter of chance encounter.

Initially, smugglers were small
groups of opportunists. By the late
1920s, large criminal syndicates had
recognized the huge potential
profits and had virtually taken over.

A corresponding orchestra of radio messages hit the ether[1] as they coordinated shipment and rendezvous.

The Coast Guard astutely recognized the mob’s new orchestra as a potential
Achilles’ heel and began working with labs and industry to develop a new
series of direction finders. 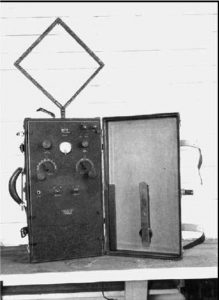 What followed was a series of shore based coastal DF sites along with a variety of portable units. Impressive, considering that direction finding was still in its infancy.

Some of the first smuggler shore stations tried to pass themselves off as amateur radio operators. They used amateur like callsigns and procedures on air. Some even had neatly arranged home stations complete with QSL cards
on the wall[2]. I didn’t find any info on whether real hams were involved. I did find that the bad guys were paying their head radio op $10,000 a year, a huge sum in 1930.
With the Depression in full swing, you can imagine the level of temptation.

Law enforcement teams with their new portable direction finders hustled to locate and bust shore stations when they were active.
If you’ve ever tried mobile HF T hunting, you know this is no small
task …

Meanwhile, shore based DF site went after the motherships, hoping
to achieve a fix and vector the nearest cutter to the scene in time
for a bust. Another innovation from the team, shipboard DF, improved
their odds significantly. Coast Guard managed to “borrow” Army civilian
William Friedman and installed a DF system aboard one of their 75
foot patrol boats. 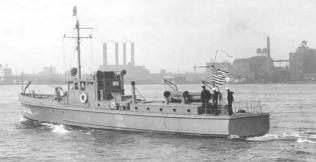 75 ft patrol boat like the one used for HFDF trials.

Shipboard DF offered both cutoff bearings to the shore sites and the ability to follow a
bearing to a bust. (Friedman is better known as leader of the Army Signal Intelligence
Service (SIS)team which solved the WWII Japanese diplomatic cipher machine and later
as an NSA plank owner.)

For a successful bust, the Coast Guard cutter still needed to be close enough to the
DF fix to catch the speed boats loading before they dashed to shore to unload. What if they
could obtain advance knowledge of the rendezvous and set up an ambush?
Doing so would require breaking the rum runners’ codes.

As the rum running syndicates grew in size and sophistication, so did
their encryption, progressing from simple substitution ciphers to more advanced
ciphers with different keys for each group. Hundreds of daily intercepts
soon overloaded Coast Guard’s few self taught cryptanalysts. The Army’s SIS
turned down a request for assistance, wary of being a military outfit drawn
into civilian law enforcement. 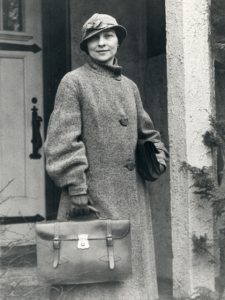 Enter Elizebeth Friedman, wife of William Friedman and top notch cryptanalyst. Brought onboard in a civil service position, she and her team soon achieved remarkable success. Her courtroom testimony was instrumental in convicting senior syndicate members. And her response to scrutiny by one of Washington’s infamous bean counters was legendary. Pointing out her team’s successes, she coolly noted that her entire annual budget was less than the price of one tank of fuel for a Coast Guard cutter.

Washington finally threw in the towel on Prohibition in December of 1933. But the Coast Guard’s effort was hardly wasted. As the first hint of war clouds gathered over Europe and Asia, the Navy inherited a number of the well calibrated and smoothly functioning shore based DF sites. And the lessons learned from portable direction finders would prove valuable in chasing Axis agents. When war broke out, the Coast Guard became part of the Navy and its well trained team continued its cryptanalysis efforts.

Elizebeth and William Friedman were honored by induction into NSA’s Cryptologic Hall of Honor, along with Coast Guard cryptologist Captain Leonard Jones. And the Friedman’s each have an auditorium named in their honor – Elizebeth at ATF (Alcohol Tobacco and Firearms) and William at NSA. The Coast Guard once again acknowledged the importance of its cryptologic
mission with establishment of Coast Guard Cryptologic Group in 2007.