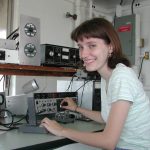 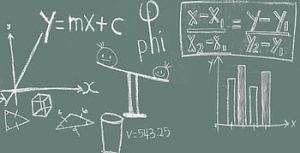 As 5G and other new commercial wireless
systems deploy, competition for scarce radio
spectrum will become intense. As stewards of
a good chunk of that spectrum, it will be up
to hams to justify our allocations. Some are
saying that new technology will make our
traditional emergency communications role
obsolete.
So, what else do we bring to the table? How about our long and proud history as a springboard for youngsters who went on to landmark careers as engineers, Nobel Laureates and astronauts? Here are some examples.

Armstrong grew up in suburban New York at the turn
of the century and was fascinated by wireless
technology. By age 14 he had filled his bedroom with
wireless gear and erected a 125 foot antenna on his
parents property (no HOAs in those days). He was soon
accepted at Columbia University where he received his
electrical engineering degree in 1913. After serving
as a Signal Corps officer in WWI, he went on to an
illustrious career during which he invented the
superhet receiver and FM.

Art took an early interest in emerging wireless technology.  Licensed at the age of 14, he assembled his own station in the attic of his family’s Midwestern home and soon gained recognition by relaying comms from a 1925 arctic expedition. As his knowledge progressed, Art recognized frequency stability as a major problem with radios of that era and started a small company in his basement making and selling high stability transmitters. Art’s company, Collins Radio, grew into a major supplier of radios for arctic expeditions and the
military. His high stability VFOs later made volume
production of single sideband (SSB) radios a reality and Collins Radio became the gold standard for HF radio communications equipment.
https://worldradiohistory.com/Archive-Catalogs/Collins/Collins-First-50-Years.pdf

The KWM-2 HF transceiver (right)
was considered the gold standard
of its era.

Both men credit neighborhood hams who helped them assemble their first
Heathkits with sparking a childhood interest in electronics. Wozniak went
on to get his license and explore the airwaves. They later joined forces
to found Apple Computer and launch the personal computer revolution. 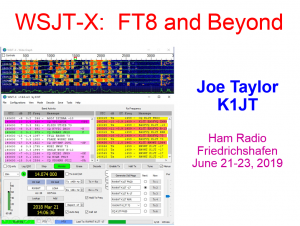 First licensed as a teenager, Joe Taylor’s interest in amateur radio led him to radio
astronomy, a career in astrophysics, and a Nobel Prize in physics. He is well known in ham
radio circles as the creator of a series of weak signal modes which have taken the community
by storm.
https://www.dx-world.net/keynote-speech-joe-taylor-k1jt-wsjt-x-ft8-and-beyond/

All of these superstars share a common thread.
Each had a mentor, or “Elmer” in ham speak, who
helped them get started – someone to help assemble that first Heathkit, put together their first station, or help raise that first antenna.
Elmering remains one of ham radio’s most important contributions. OVH has a strong tradition of outreach with our support of activities like JOTA and youth science fairs. Opportunities for in person Elmering may be limited while we endure the health crisis. However, with remote learning underway, many teachers will be looking for online content for their virtual classrooms. Suggestions welcome.