What if I told you that even without any astronauts actively working a radio and making contacts, there was still a reason to point your antenna at the sky when the ISS passes over and throw some RF at it? Well, it’s true, and it’s nowhere near as difficult to accomplish as you might think; in fact the last two nights in a row I’ve successfully sent a radio signal up to the ISS and gotten one in return. How? I’ll tell you!

There are a number of objects in orbit that we as amateur operators can actually transmit to. There are a number of low-powered satellites of various modes you can talk through, but the ISS is the most well known of LEO (low earth orbit) objects for obvious reasons; just about everyone knows what it is! While being able to talk to an astronaut on the ISS is a very rare occasion reserved mostly for school activities, there is a payload on the ISS you can make use of; an APRS digipeater. Many of you may know what APRS is, maybe you have a radio with it and enjoy playing around with it as I do. For those that don’t, the APRS website is a good resource for learning more about this packet-based digital communications mode.

The basic idea is this: point your antenna at the ISS, transmit an APRS packet with maybe your location information and a short message, and wait for it to be returned. Unlike a normal repeater, an APRS digipeater is a “store and forward” system; it receives packets of data, then re-transmits them on the same frequency after doing any required modification. If you’re fast enough, you can exchange short text messages with other hams. I know what you’re thinking, this sounds complicated and difficult. While working APRS over the ISS has its own degree of difficulty, the equipment you need isn’t very complex or expensive. In fact, you can probably make your own APRS station for very little money. 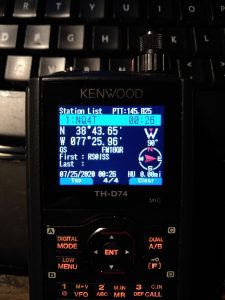 You don’t need a lot of power with the right antenna. In my case, all I needed was a good yagi antenna and my Kenwood HT with all of its 5 watts of power. The Kenwood is one of a few HT’s that have built in APRS support, making it easy and convenient. As you can see in this picture, I’m showing up on my radio’s station list; and I never actually set the clock on my radio as it’s still an hour behind. The neat thing about APRS is, since it’s a single frequency with store-and-forward, you will actually be able to get your packet back. This is handy on the ground if you want to make sure your packet made it from your radio to a wider area. However, in this case, it instantly lets you know you were successful in hitting the thing as it screams across the sky above you. For extra confirmation, there are a number of ground-based stations that not only are listening for the ISS’ digipeater, they also upload that information to the internet. ariss.net provides a nice list that shows all the stations that have recently made contact with the ISS’ APRS digipeater.

As you can see, 3 minutes after hearing my packet bounce back to me and the ISS dipped below the trees, I checked my computer and there I was! Not only had my APRS packet been transmitted back to me, but to a ground-station that uploaded it to the APRS-IS network. So what kind of antenna did it take to get 5 watts of RF in to the ISS? 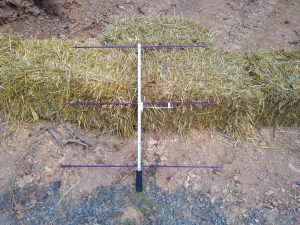 I used this guy, an Arrow II handheld satellite yagi. Its 3 elements on 2 meters is more than enough to send the 5 watts from your HT up to ISS. When you’re right on track with the ISS, its digipeater is quite capable of opening your radio up to a full S9! Not bad for a five watt transmitter that’s ultimately a few hundred miles away. Of course, with VHF line of sight is everything; and being 254 miles above the ground does tend to give you excellent line of sight coverage. I was even able to decode APRS packets from the ISS on the antenna on my car! The ARISS page does mention that with the radio acting as a digipeater; you might have better luck with FM Narrow. This is something I will have to try.

However working the ISS compared to an FM satellite does pose a challenge; it’s harder to track the ISS. With a normal amateur radio satellite, there is usually enough activity keeping it transmitting most of the time. In fact as any satellite operator will tell you, the satellites are full-duplex. But it’s different with the APRS digipeater. It’s only transmitting occasionally. This means there may be a large part of its 10 minute pass that it’s silent. It feels like it’s almost a guessing game and luck; you know about where it’s supposed to be, but you don’t know if you’re right on it. The transmissions are also extremely short, just a couple of seconds long, which adds to the difficulty. You almost have to be ready to send an APRS packet as soon as you see it open your radio’s S-meter all the way. This led me to make a small modification to my antenna to make it feel like less of a guessing game, as well as help me on my future endeavors of working satellites. 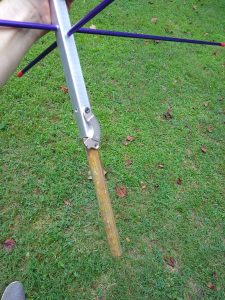 No, it doesn’t look like much in the photo. It’s a piece of wood jammed in to the bottom of the antenna with a magnet attached. But what it does is give me a few extra inches on the boom that I can place my phone, which has a metal plate on the back for a magnetic car mount, right on the antenna! This allows me to know exactly which direction I’m pointing the antenna as well as what elevation I’m pointing it at. I use the Android app W1ANT Satellite Tracker on the phone. All I have to is pick which bird I want to talk through, and it will show me a screen that gives me real-time information about where I need to be pointing my antenna to hit the satellites. On my second night of attempting APRS off of the ISS, I found the app removed all of the guesswork out of pointing the antenna. No more waving it around my back-yard like a maniac pushing the beacon button hoping I was on track. I was able to capture more packets and get my packets up there a lot easier. The magnet holding the phone doesn’t affect the phone’s compass too much either; a few degrees difference but nothing you can’t compensate for. The ISS’ digipeater runs on 145.825MHz; whereas all the “normal” APRS activity is on a nationwide frequency of 144.390MHz.

But while I did it using an HT with built-in APRS and a professionally made antenna, you don’t need any of that. In fact, with the right passes you may be able to get a packet up your HT’s antenna! But the nice thing about a yagi, other than focusing most of your signal in the direction you’re pointing it, is they are quite simple to make from cheap materials.

I built this back in the Spring of 2015, just a couple of weeks after getting licensed. It’s a quick-and-dirty build of the tape measure yagi that has been circulating the internet for a while. Despite its looks, this 2m antenna had no problem getting me in to SO-50; though I didn’t have much success ever hitting the ISS digipeater with it (mostly due to problems with aiming while working APRSDroid). But an antenna like this, that can be made for as little as a couple of dollars, should provide enough gain to get your signal out in to space. Notice the cell phone zip-tied to the back of the boom, the modification I made to my Arrow is far from a new idea.

Don’t have an HT with APRS? That too can be gotten around! APRSDroid on Android and PulseModem on iOS both provide AFSK (audio frequency-shift-keying) output and input. All you have to do is tune your analog HT to the proper frequency and send audio between them. They even make Bluetooth based TNCs to make this even easier. In fact, all of my early APRS activity was done using a cable modified to connect between a Baofeng and my smartphone. Using the radio’s VOX setting, I had no problem sending and receiving APRS packets. In fact, that was one of the driving reasons I upgraded to an HT with built-in APRS, and the reason my second HT also has APRS. In fact, I run APRS quite a lot when I’m out and about. I think it’s fun to see where I’ve gotten a packet out to, not just to see what my antenna is capable of. Sometimes you’ll see you’ve gotten picked up hundreds of miles away when tropo-ducting is occurring. You can also use a website like aprs.fi not only to view your APRS activity, but view all the activity that’s been sent to APRS-IS, either directly or via RF gateways.

If you’ve ever wanted to try and bounce a radio signal off the ISS, right now the APRS beacon is the only thing that’s always active. While it is nothing more than a beacon, the messaging ability gives the possibility for an actual QSO, provided you can type out your message fast enough while tracking.

2 thoughts on “Bouncing Signals off the International Space Station”