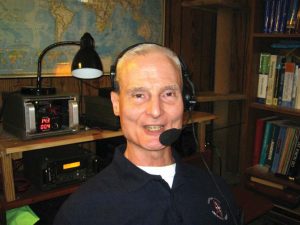 I’m honored to have been elected OVH’s Vice President and I look forward to working with you and the other officers and directors in club activities and in the
recruiting of new members.

Like many of us, my interest in ham radio began when I was a youngster. In my case, that was over fifty years ago in junior high school. After passing our Novice exams which included a 5 wpm Morse code test, a couple of us pooled our very limited funds and managed to buy a World War II surplus ARC-5 receiver and enough parts to assemble a power supply and a 6L6 (vacuum tube) crystal oscillator. The total cost for these items was probably under $20 but that was a lot of money back then. I can still remember the smell of the solder melting as we carefully added each component. Antenna? Well, that was sort of a long wire – made from as much lamp cord as we could afford from Sears at four cents a foot. We considered the lamp cord a good deal because it easily split down the middle and we get twice the original length by connecting the two ends together. But most of all, I remember the thrill of my very first contact using Morse Code. All the way from California to Idaho on 40 meters using equipment I’d helped build. What excitement.

Several years later I envisioned plans for college and work in what would eventually become Silicon Valley. Uncle Sam, however, changed them with the best recruiting ad I’d ever seen. It was right on the front page of the newspaper and consisted of my birthday with the number eleven next to it. That led to a career in the military, followed by a return to school on the GI Bill and a second career in the wireless industry. There were many rewarding experiences, but not much time for ham radio.

So … here I am in my second childhood (retirement) and enjoying a return to ham radio. In 17some ways, I feel a bit like a mole poking his head out into the sunlight for the first time. Where did all the World War II surplus stuff go and what are these funky things linking repeaters via the Internet? It’s been a steep learning curve at times, but never fear – I’m trainable (at least that’s what WiFE says). I look forward to working with each of you in club activities as well as recruiting new hams and helping them share the same excitement we all felt when we made our first contact.