SUNSHINE CORNER Happy birthday wishes to Gus N4MLE, Al KB4BHB, Maury W4HYB, Ron N4RDZ, Gary WG4ARC, Mark WA4KFZ, Steve WB0AOD, and Jim W4HJH. Hope you all had a great day! Continued best wishes to Butch W4HJL who is now home recovering from his surgery Best wishes to Art W1CRO who landed in the hospital for a few days but is also back home Please keep Wayne N7QLK & family in your thoughts, his father isn’t doing well Had a great time at the Quantico triathlon on August 26th, the course was on the base, we had a good show of club members providing communications. Thank you to the organizers and club members Congratulations to Terry KC4DV on a successful special event in South Carolina during the eclipse Freedom Center Mini-Tri this Sunday, September 17th, please contact Andy KJ4MTP if you… Read more »

VP’s Corner Jeff Fuller WB6UIE Many thanks to Rob Saul,KK4MXU, and the crew of Buckhall Volunteer Firestation for offering the use of their Training Room for our new OVH monthly meeting site. Our next meeting will be on Tuesday 19 Sept at 1930 local. A map and imagery are shown here. Please use the guest parking area at the front of the station (near the flag pole).    Since this month is National Emergency Preparedness Month, it’s a good time for everyone to check their emergency kits and portable rigs and make sure your batteries are charged. NOAA’s prediction of an active hurricane season has come true in spades. Looks like amateur radio will be a valuable member of the Florida emergency response team. They’ve put out a call for assistance from local hams on government web sites and news… Read more »

Presidents Letter: Welcome to September, it has been a busy time since our last club meeting. From The Marine Corp Triathlon/12K, to the upcoming Freedom Center Tri-It-Now “THE 14.06”. The Solar Eclipse that had all of us watching or looking at. Let us not forget about Butch and his surgery. That is just to name a few. There are others that I have not mentioned. While I am on the subject of activities, let us not forget that this is National Preparedness Month. Are you ready in case something should happen?? If you would like to volunteer, there are local organizations that could use you such as CERT and ARES. These are just a couple of ways that you can make a difference to your community. As we have recently witnessed, the powerful force of Mother Nature is not to… Read more »

Presidents Letter: Hope everyone has had a good summer so far. Many thanks to Andy for his continuing support of the Tri-it now events. These are enjoyable events to assist with. If you would like to help out on a Sunday morning for a couple of hours, you can’t beat this. Also, don’t forget that there is the Prince William ½ Marathon coming up on October 1st. Watch for further details and hope you can participate. Well, the club has a clean trailer once again! Special thanks to Theresa, KG4TVM, for organizing this outing. The members that were there were, John, KG4NXT, Dick, WN7S, Terry, KC4DV, Sandy, KM4JUS, and myself. Almost ready to decal the trailer, again thanks to Theresa. Looking forward to seeing it wrapped. The new website is up and running, and it looks fantastic!! Many thanks to… Read more » 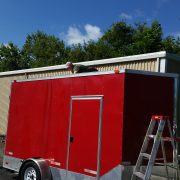 After waiting for some time,  the OVH trailer decals  which we approved at a general membership meeting are here!    We are told that preparation of the trailer surface is very important before applying the decals.   Theresa arranged with the city of Manassas to use their facilities to wash the trailer for the first time in 5 years. After a post on the reflector, several members washed the trailer.   The members that helped are Dick, WN7S, Terry, KC4DV,  Theresa, KG4TVM,  John, KG4NXT,  Sandy , KM4JUS,  and Ray , KM4EKR. Now that the trailer has been washed, we need to schedule a decal party and we should do additional surface preparation before attaching the decals.  importantly,  the OVH pig decal came out looking very nice. 73, John KG4NXT

The next club meeting will be on Monday August 21st from 7:30 to 9:00PM at the Prince William County Government Center (McCoart Center).  We’ll be in room 202 of the Development Services Building.  As always, OVH meetings are open to the public. Remember that all club events such as meetings and  club interest events will be in the web site event calendar accessible via the Home page right side menu and on the main menu under the “About the Club” option.

PRESIDENTS LETTER: I hope that everyone is surviving the summer heat… Well, we have gone through another successful Field Day. At least the weather cooperated with us this year. I am looking forward to hear all of the scores. I want to thank all who took part in this fun event, it was great to see the folks who only make it to a couple of events a year. As a surprise, Terry (WA5NTI) made an appearance, even though it was a short one, it was good to see him. As always, hats off to Phil, with another awesome spread of delicious food!! And then there was the epiphany that Byron had……. Even though the Fourth of July evening was rainy, many places still had firework to celebrate this wonderful country of ours. I hope that many OVH members participated… Read more »

“WIRES” capabilities of the new OVH repeater: although the OVH’s new WIRES-X repeater is still not fully operational, those who intend to use it will need to spend some time learning and reviewing how to use its capabilities effectively.  The November 2016 meeting presentation slides by Ken / KE2N posted on the W4OVH.NET web site provide a very good starting point. One of the online PDF references buried within Ken’s presentation https://www.hamoperator.com/Hamoperator/WiRES-X_Bible/WiRES-X_Bible.html  sometime referred to as the “WIRES-X Bible” is worth special attention for learners. The likelihood of “in shack” RF is always an issue, particularly when transmitting at higher power levels.  Who hasn’t gotten a mild, but startling “hot” RF burn or “shock” just from touching some metal object near his/her operating position while transmitting? In-Shack RFI also can play havoc with computers in your station.  There are many actions one may take… Read more »