July has been another busy month for the Ole Virginia Hams:

The Return of the OVH Breakfast

July 17th saw the return of The Ole Virginia Hams Breakfast @ Yorkshire Restaurant. Originally started by Former President Byron, AK4XR, this was the first OVH Breakfast since 3/14/20. It was good to see everyone again in person. We all had a nice time before breaking up and getting into our day.

The OVH Breakfasts are held on the Saturday before our Monthly Meeting @ 8 AM, so the next one will be August 14th, COVID permitting. Hope to see you there.

Officially titled The Freedom Firecracker 5K and 1-Mile Fun Run, it was scheduled to start on Sunday, July 4th at The Freedom Aquatic & Fitness Center, Manassas.

At this time, we would like to recognize the following people for their support:
Wayne, N7QLK; Al, KB4BHB; John, KG4NXT & “The Other Ken”, KN4DD

We were all in position by 8 AM, 3 fixed positions and one roamer with the race coordinator.
We were operating simplex on 147.525 with our 146.970 repeater as our alternate.

It was a great day for a race, weather wise. Mid 80s temperature with a dew point of about 60.5°. We met @ the Swim Parking Lot @ 7:30 AM for coffee, donuts and of course to review our assignments from Shadow (Wayne). 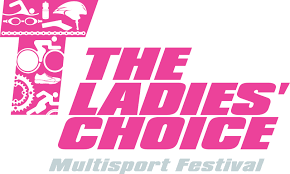 We also supported a Tri It Now event on the 25th of July at The Freedom Aquatic & Fitness Center, Manassas. This time we had to meet much earlier for races, led by Andy, KJ4MTP, code named “Shadow”. If you are wondering about the continued use of the name Shadow, it is because that person has to shadow the race coordinator, which in itself is an arduous job.

This set of races was officially titled Tri It Now THE LADIES CHOICE.

We were all in position by 7 AM. There were 10 spotter positions to fill, and for a while it looked like we were going to come up significantly short. A last-minute e-mail blast on the reflector brought several more volunteers. At the time of the race, we were able to fill 9 of the 10 positions.

The Ladies Choice races that were supported were:

It was another good morning for a race. While it did hit 91° later in the day, the morning was in the mid-80s and humidity was low, with a nice breeze to boot. This time we met @ the Swim Parking Lot @ 6:30 AM for coffee, donuts and of course to review our assignments from Shadow (Andy).

The first race started about 7:30 AM on the 25th & finished about 10:45 AM. While we didn’t have any physical incidents like bike crashes, we did have a few minor events. Over the radio one could hear reports of individual bicyclists without helmets or not following the official routes. Nothing serious, but it did keep us on our toes.

A big thanks to everyone who turned out to support OVH in the Tri It Now endeavors. 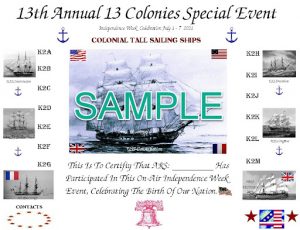 Last in this article, but certainly not least, is/was the 13th Annual 13 Colonies Special Event.

Many of us have worked this special event before and have enjoyed it.   You can get a colorful certificate for working only one station.  This year’s certificate has Colonial Tall Sailing Ships.  All the stations except the bonus point stations had a 1 X 1 call.  For example, Virginia had K2B and Georgia had K2G.