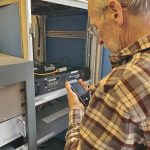 Last year,  NOVEC rearranged  the ac power feed to our repeaters hosted at their Lomond Drive location.    When lightning stuck the NOVEC tower next to our repeater shack, some of our equipment was damaged.  Here is the damage that Ken, KE2N found :

Ken found the reasons for why we suffered lightning damage:

What I observed was that NOVEC had re-arranged our power feed since my last visit.  The feeder cable (previously underground) was now in a plastic conduit running in an overhead cable tray, adjacent to various large cables coming down from the microwave dishes on the tower. NOVEC’s cables and our feeder run in opposite directions, so that current induced in our feeder cable is opposite in polarity to current coming down from the tower and our coax cables.

And the new panel feeding our equipment had no grounding electrode connection. The only ground source was at the far end of the aforementioned cable tray.

I spoke with NOVEC about changing this feed arrangement, but they were disinclined to make any changes.

On April 21,   Ken, KE2N;  Gil, KM4OZH and John, KG4NXT went to NOVEC and worked on repairs. Gil, KM4OZH comes from a family of electrical contractors and helped with installing and routing the grounding wires.  Here is what was done:

As a result,  we have our D-STAR back on the internet. The 220 repeater is back and will be linked up for the Thursday night net.

We thank Ken, KE2N for his able help in getting us back and also preparing us for the next lightning strike.