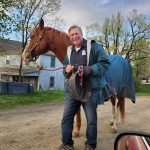 The event consisted of a 50 mile race,  a 30 mile race and a Ride and Tie race (RT).  The RT event had a team of 2 humans and one horse.  One person rode the horse and the other ran.   At various points,  the horse/human team pulled ahead and tied the horse to a tree.  When  the second person caught up, she got on the horse.  Meanwhile, the first person then became the runner.

Most of the communication was on a 2 meter repeater but contact the with drag riders (defined below) was by GMRS.

OVH’s own Duane, KK4BZ helps run the event and is also a horse owner and competitor.    He normally runs the “drag riders”.   The drag riders have nothing to do with quarter mile racing or even dressing up like Rue Paul ; it is the riders who perform a tail end charlie function for the horse race. On Saturday, Duane competed in the race and had Zoe run the drag riders.

Duane did well.  In his own words:

“My horse, Chick, was awesome. We finished 4th overall. Just a few seconds behind 3rd, but the best thing is that he completed happy and sound. Chick was definitely tired after hauling me around on a tough, tough course, but he never gave up trying to keep up with the more experienced horses. For him to get us into the top ten was a monumental task and not expected.”