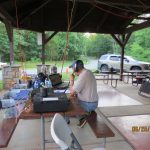 We also had a super under 18 YL operator – Sarah Peart. She made 19 FT8 contacts.

Cat, KM4PBD and Byron, AK4XR held a fox hunt. Cat made an expert field repair of the Fox and hid it on one of the signs in the park baseball field. Gil, KM4OZH was the first to find the fox and won the fox hunt.

We had a very unusual antenna mount. Byron brought his cherry picker and Gil made an antenna rotator for it. This was used for the VHF station.

Some years, we have not been able to get an elected official for the bonus points. This year we got two: 1) Prince William Supervisor Victor S. Angry invited by Theresa, KG4TVM and Lynn F. Greene, member Manassas City Council invited by David, KQ4BDS. We also had an ARRL assistant section manager from Utah – Jerri ,WJ3RI. Finally, we had Tobin, operating as K4VDF, invited by daughter Cat, as a member of a served agency. K4VDF was his unit’s Field Day call sign.

Our old chef Phil, AC4PL was not able to help due to illness. Theresa did the food planning and bought the food. Byron and Cat cooked dinner. Bill, AF4LL paid for the food we purchased. We also had lots of potluck food. Thanks to all who brought food.