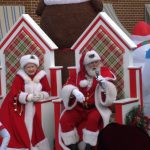 What a difference a year makes.  On December 3rd, the Ole Virginia Hams supported the 76th Annual Greater Manassas Christmas Parade. While just cloudy last year, this year’s forecast called for poor weather. They got it part right. While the weather was gloomy during the preparation phase or setup phase of the parade, the weather did improve as the day went on.

John, KG4NXT, Theresa, KG4TVM and yours truly met at the Manassas City Yard at 6:30 AM to collect & decorate the OVH trailer. It was about 50 ° at that time. Overnight and that morning we had about .3” of cold rain, which made lying on the ground to hook up the trailer and electrical just miserable.

It was too wet to put a lot of decorations on the trailer. The wreath, garlands and magnetic stickers just kept sliding off. We opted to decorate my truck and use just one string of Christmas lights on the trailer itself.

This was my first time towing our trailer and the first time driving in our parade, so Theresa wisely decided she best ride with me to keep an eye on both me and our travels. I am grateful. As an experienced hand, she gave me a sense of calm throughout the drive.

According to the archival weather website for IAD, the temp went from 50 degrees at 6:30 AM to a whopping 53 degrees at the start of the parade @ 10 AM. But it was still raining on an off during the time leading up to the parade beginning.

We also had a bit of an adventure at the start of the parade as well.

A woman had what might be described as a cardiac event. She stated that she had chest pains and couldn’t breathe. We were nearby and there was enough of a commotion from the sidewalk crowds that Theresa left my truck to see if she could give assistance. She returned shortly after Manassas Emergency Services got involved.

Manassas City was certainly prepared. EMT people were on site almost immediately. With the crush of spectators on either side of the road and parade participants clogging the middle of the street, it was clear that a normal size ambulance would not just drive up. But Manassas Emergency Services was ready for this scenario with an ATV vehicle the size of a “stretch” golf cart. They were able to treat the woman and then transport her in the cart over to the nearby ambulance.

With regard to participants, we had a number of drop outs and cancellations due to the weather. I was, however, pleasantly surprised with the numbers who stayed with us. And by that I mean the parade watchers as well as the parade participants.

I guess it really is true. People really do love a parade.

At this time, I’d like to recognize our volunteers for the parade.
As usual we were lead by George, K4GVT. We also had John, KG4NXT; Theresa, KG4TVM; Byron, AK4XR; Greg, KM4CCG; Lynn, KX4HR and Wayne, N7QLK in his inaugural appearance as Net Control. And Wayne did a great job too, especially under such sub optimal conditions.

To see all of the great pictures from George, K4GVT please follow the link:
https://www.k4gvt.com/ovh/Manassas%20Christmas%20Parade%202022/index.html