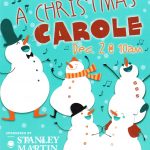 Saturday, December 2nd was a grey, cold day in Manassas but the energy was electric. The 72nd annual Greater Manassas Christmas Parade kicked off at 10 am. OVH club members came out to provide radio communications along the parade route. Also the club trailer was entered in the parade as a participant. Terry KC4DV pulled the trailer thru the parade with his truck. BUT before he could do that, we had to decorate! The Saturday prior to the parade Terry, Ray, Sandy, John and myself went to the utility yard to hang the Christmas lights on the trailer. Then the morning of the parade Terry, Rosalie and I finish decorating in the staging area. Pinky road shotgun in the truck during the parade waving the entire time. Seeing all the smiling faces watching the parade made the cold weather a lot easier to take.
After a great breakfast provided by the City to the volunteers the following club members were on the parade route John KG4NXT, George K4GVT, Steve N4OGR, Jan KG4TMW, Andy KJ4MTP, David KG4GIY, Ray KM4EKR, Sandy KM4JUS, Brian (Rosalie’s son), and Theresa KG4TVM. I apologize if I missed anyone.
Happy Holidays!