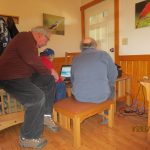 After a pause of about 10 years, OVH operated Winter Field Day at a cabin in Shenandoah River State Park, which qualified us for a bonus of 1,500 points. OVH members participating included Don, WA2SWX; Theresa, KG4TVM; Jimmy, WD4OJY; Cat, KM4PBD; Ron, K3FR; Gil, KM4OZH; Duane, KK4BZ and John, KG4NXT. Al, KB4BHB tried to reach us on 40m phone, but we could not hear him and he could not hear us.

Most of the contacts were made on 40m phone and 20m CW. Don and Ron were the CW operators. Don was an intercept operator in a former life. Ron brought a cootie key and did 40m CW. We were using the N3FJP logging software for Winter Field Day and the two laptops were connected by an ethernet cable. The laptop near the 40m station had RF issues but we logged in spite of them.

Theresa cooked a wonderful rib dinner for everyone with just baked cornbread. There were only 4 ribs left over.

On Sunday morning, John, KG4NXT made a number of digital contacts on 40m using JS8CALL. We then looked at the snow outside and the forecast for more snow and freezing temps and decide to head for home.