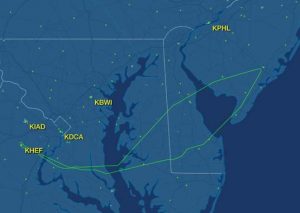 On February 24, 2017 afternoon, Byron / AK4XR, a non-current private pilot, took up an offer from Paul / W4ZB to go flying in a P210N aircraft and operate aeronautical mobile on 2 meters FM while aloft. The flight was fl own as a round robin from KHEF (Manassas Airport) up to KACY (Atlantic City) and then return by a slightly more southerly routing, most of the en-route phases was fl own at an altitudes of 6,500 or 7,500 feet. 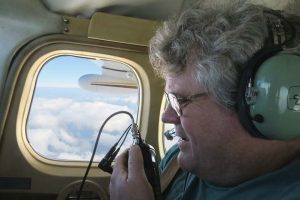 Because the line of sight range was nearly 100 miles even at those relatively low altitudes, no problems making contacts were expected. Connectors and cables were used so that the antenna input/output on Byron’s handheld 2 Meter FM transceiver could be connected directly to one of the aircraft’s external VHF comm antennas, but would otherwise be independent of the aircraft electrical and electronic systems. 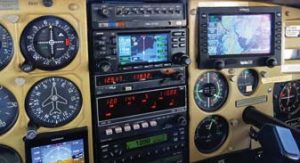 The basic plan was to make calls to 2 M repeaters along the general route to make contacts; to help do that, a list of repeaters with frequencies and PL tone codes was compiled and pre-programmed into Bryon’s transceiver, power output
set to 5 watts.

Right after the departure from KHEF, Byron was so preoccupied and focused observing airplane / flight matters (as a previously active pilot) that he did not make any radio calls. However, after a short while at 150 knots (175 mph) as we were climbing out over the Maryland eastern shore, Byron began calling and bringing up repeaters, but he was unable to contact anyone through a repeater. A short while later as we were crossing into Delaware he decided to call CQ on the 146.52 MHz FM calling frequency. A very different result! After a few calls, Byron suddenly had a big grin: a bunch of different stations were all calling back to him at the same time. He was advising callers his position was at 7,500 feet up in the air but he didn’t quite know where he was above the cloud deck. [Several panel instruments and displays gave the precise position.]
I told him to look out his window, straight down, because – on his first contact – we were right over Dover AFB and part of its runway could be seen below through a break in the clouds. Over the next 40 minutes or so, Bryon made about 15 more contacts with stations in Delaware, New Jersey, Pennsylvania and Maryland. By then we had turned around and were headed back towards Manassas. The experience was somewhat like being a rare HF DX station on the receiving end of a pile-up!

Next time: better planning; use pile-up handling to spread the callers out, systematic logging with position at QSO time (a logger to help?); also try 2M SSB and 432 SSB / FM. With some practice, we could try for a new VA QSO Party mobile record in 2018: radio operating on flight routes up to 23000 feet above, but traversing most VA cities/counties during flights up to 9 hours each. 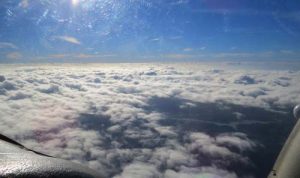 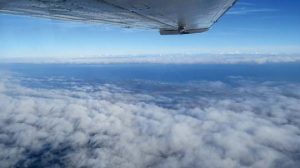