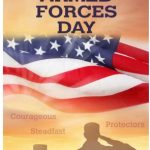 As we celebrate Armed Forces Day this
month, lets take a moment to recognize some
of the contributions made by our fellow
hams in uniform. This column, I’d like to
recognize Edwin H. “Howard” Armstrong,
W2XMN, whose contributions helped to forge
the foundation for much of today’s radio
communications technology.

Armstrong grew up in suburban New York at
the turn of the century and was fascinated
by wireless technology. By age 14 he had
filled his bedroom with wireless gear and
erected a 125 foot antenna on his parents
property (no HOAs in those days)[1] He was
soon accepted at Columbia University where
he received his electrical engineering
degree in 1913.

America entered WWI shortly after his

graduation and Armstrong joined the Army.
Sent to France as a Signal Corps officer, he
was tasked with improving short wave (< 200
meters in those days) receiver sensitivity.
After recognizing problems with stability
and selectivity in the existing designs,
Armstrong embarked on a radically new
approach – one in which all the gain took
place at a single intermediate frequency
down to which incoming signals were mixed or
“heterodyned”. His design, which forms the
basis for most modern radios, became known
as the superheterodyne receiver.

Armstrong returned to civilian life
after the war and soon earned a
professorship at Columbia. There his
research continued, spawning even more
landmark inventions. Among them was one

familiar to today’s hams – frequency
modulation or FM. So, next time you
enjoy a noise free 2 meter QSO or cruise
effortlessly through the HF bands, thank
Howard Armstrong.
May will close with another important
remembrance – Memorial Day. Lets all
take a moment to remember those who have
sacrificed their lives to protect our
freedoms.
May’s meeting will be a busy one
with Hamfest coming up and Jay’s
wireless hotspot presentation. Hope
to see you there!