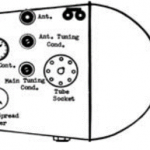 and year’s end are traditionally
a time for reflection and giving
thanks for our many blessings.
This Veteran’s Day, lets take a
moment to express thanks to our
veterans – the young ones who are
in harm’s way today defending our
freedoms, and those who have gone
before, sometimes giving all.

Amateurs have a proud history of

contributions during our nation’s
conflicts. This Veteran’s Day I’ll
cover a fascinating but little known
part of that history – radios built by
American and Allied prisoners of war.
For a moment, imagine yourself as a
WWII POW. You’re injured, on short
rations, and living in primitive
conditions. How will you find parts
for even a basic receiver? And, of course, the design will be yours (no
references or tube manuals). Since
consequences of discovery by your
captors will be severe, your
design must also be small and
concealable.
The German policy of
assigning POWs to work details
did make the challenge a  little easier.   Radio  parts just seemed to disappear from the repair shop now and then.

Japanese camps, on the other hand, were notorious for their brutality.
Those in the Philippines were among the worst. Disease and starvation
were rampant. Imagine trying to assemble a radio under those conditions.
Shown above is a clever design by a POW in one of those camps. Its one
tube regenerative circuit was concealed in a GI canteen. Stowed by day
in its canvas pouch, it looked just like any other issue canteen. At
night, POWs used it to search for news of MacArthur’s pending invasion.
Punishment for possessing a radio in one of those camps could range
from severe beatings to execution. In spite of brutal mistreatment by
suspicious guards, no one gave it up. Another reminder that freedom is
not free.