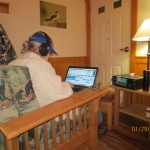 On January 29th and 30th, OVH operated winter field day at Shenandoah River state park. The operators were Don, WA2SWX;  Ron, K3FR; Gil, KM4OZH and John, KG4NXT. Several OVH members were on the air to work us as the contest started. We worked George, K4GVT and Al, KB4BHB. Butch, W4HJL and Wayne, N7QLK gave us calls but we were unable to hear them although they could hear us. We made phone, CW and digital contacts. The winter field day rules prohibit FT8 so we used PSK31 for over 40 digital contacts.

OVH member Elizabeth, KG4NXV and her family flew in from Washington state. Baby Ben was a big hit with all.

The Washington area had a snow event, but the roads remained passable. Don and John put up a 134 foot end fed while snow was falling. The initial fishline was a bit short which caused Don to tie the pull line to the fishline on his tippy-toes while snow was falling. It turned out to be tunable from 160m to 15m. Don made his first 160m contact on it.

It was a social occasion as well as a contest occasion. Theresa, KG4TVM cooked us an excellent rib and cornbread dinner and John made waffles for breakfast.