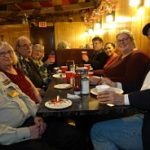 On Sunday December 12, we had our annual OVH Holiday party organized by Theresa, KG4TVM at the Yorkshire Restaurant. We had an excellent Club turnout with over 35 attendees. No tables were empty in our section of the restaurant.

We had a renewed emphasis on the potluck part of the dinner with many wonderful dishes. Al, KB4BHB and Wayne, N7QLK worried that they would not be able to provide venison for the dinner. However, they suddenly were lucky and harvested two deer and then there was plenty of venison for the chili. Gil, KM4OZH made lemon cake which was so popular that Gil did not get a taste. Gil has previously made lemon cake for the Fauquier Club’s party and did not get to taste his own cake there either. Many other dishes were brought and were quite tasty.

Theresa gave awards to Andy, KJ4MTP;  Ken, KN4DD;  Don, WA2SWX;  Ray, KM4EKR;  Sandy, KM4JUS and Paul, W4ZB. Theresa had an award for Tony, KM4KLB but he was not feeling well that morning and did not want to spread it at the dinner. Theresa and John, KG4NXT later delivered the award to his house. Andy was also not able to make the party and his award will be presented at the January meeting. The details and reasons for the awards are listed in the Sunshine corner and will be be repeated here.

As always, we collected new unwrapped Toys for Tots. We had two Marines come to the dinner to collect them. As always, the Marines were well fed. We loaded their car with over 40 toys and one member gave them a check for $100.

Bill, AF4LL donated $100 to the club for restaurant and food costs. Thanks Bill.
Hope to see you all at next year’s Holiday Party.