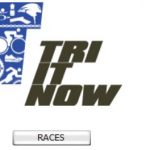 On Sunday, October 17th, OVH supported the last Tri-It-Now event of the season, the “Tune Up Tri”.

We have been very fortunate this year in that it was another beautiful day for a race. While the afternoon was cloudy & windy, the morning was a cool 60°, fair, with low humidity. In short, perfect.

Before the race began, we had a small meeting and presentation. Our own Andy Gamponia, KJ4MTP, who is our liaison to both SOWW (Serve Our Willing Warriors) and the Tri-It-Now events had a task to do.

Once this small, ceremonial event was over, it was time to go to work. Thank goodness Andy, KJ4MTP, bribes us with donuts. That & some coffee and we were ready.

The organization of this event was different than the others of this year, in that we were all operating half past October and not early summer. As the sun comes up later and the day is cooler, we all, spotters and participants, had to adjust somewhat.

First difference, a later meet and start time. We had to get together at the Rally Point (Freedom Aquatic Center) @ 8:10 AM for a ~8:45 AM start time. Significantly later than the times we met over the summer.

Second difference, the order of events had changed. Because we didn’t want icicles in anyone’s hair, we moved the swim event from first to last. The triathlon started with the run, then a bike, and finally ended up with a “snake swim” at the pool.  Remember that the duathletes did a Run – Bike – Run, in near parallel time, so we were on course until the runners were off. Once all participants were off the bike and run courses, we began to secure our stations and close down.

The sequence of the events was as follows:

Once again we ran a tactical net for this event.  This means that we were to call in with our station assignment name (check point one, check point two, etc.) and end our transmission with our call sign, if there was an event. Additionally, we were instructed not to use the racers name, only use their bib number (their race number). Andy was the lead sled dog in this, code name “Shadow”. He is called that, because he has to shadow the Race Coordinator, an arduous task in its own right.

For most of us, HTs were sufficient for this event, mobiles were also acceptable. Shadow needed a headset due to the amount of noise in the area.

In closing, I’d like to thank all of the Ole Virginia Hams who volunteered to help the Tri-It-Now events this year.  And I hope we can continue to count on your support next year.