Both are Amateur Extras and “of a certain age”. Both started contesting almost immediately after licensing. While similar in their passions for both amateur radio and contesting, their approach is significantly different.

Ron is well seasoned, having acquired his novice license in 1959. For this contest he used mostly FT8. By comparison then, Gil is a relative newcomer, getting licensed just 6 years ago. Gil used SSB/phone.

Gil, KM4OZH, was first licensed in 2015. And as previously stated, gravitated to contesting shortly thereafter. He really enjoys roving contesting and for proof, one only need to look how his Mercedes is outfitted. 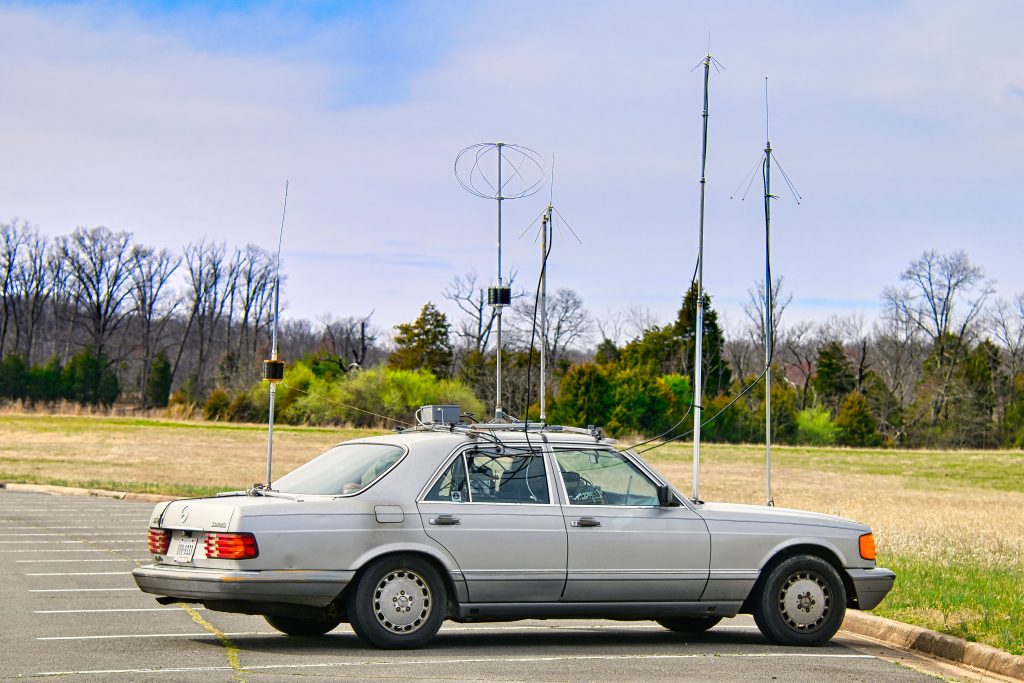 Understandably then, he prefers FM & SSB while mobile. And, unlike contesting from a base station, Gil has the added challenges of driving, PTT and logging.

When I asked Gil why he contests, he told me that among other things, he viewed this contest as “practice for the VAQP”. When asked what was needed for success in contesting, Gil replied “operator skill, radio & antenna – in equal amounts.”

In preparing for the contest, Gil, of course mentioned, “know the rules”. But he seemed to put most of his effort into the multiplier lists and their effect on his route planning.

He began just 4 minutes after the start of the contest making contacts before starting the road trip. After wearing them out, he began his drive. His route includes stops at Amissville, Louisa, Chester Gap and heading north on Rt 522 towards McConnell Mountain, before heading back. Aside from the drive itself, you would expect the time consumers would be pulling over in a suitable place, setting up antennas & the switching itself between radios & bands. Gil does not have automatic switching in the car.

Perhaps unexpected would be the “looky-loo” tourists and the occasional law enforcement officers. All of the local LEOs had their curiosity satisfied quickly, but the local citizenry was such a time drain that Gil fashioned a sign explaining what he and his odd-looking car were doing, so as not to take time from contesting.

After all that driving, Gil finally stopped contesting at 10:59 PM on Sunday. I asked him about staying up for all of those hours and he said that he “could go all night on adrenaline and contacts”.

He told me he tried to arrange for some club contacts, but was only able to do very few.

I am hopeful that next year, more of the club will turn out to make contact with our contesting club members. 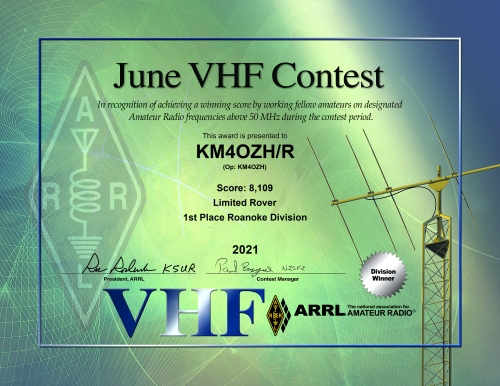 As mentioned earlier, Ron was first licensed in November of 1959 and began contesting shortly after.

Contesting has changed a lot since 1960 when paper logs and check sheets were the standard  until today, where integrated, all digital contesting, is the norm.  Now we have single operator, two radio (SO2R – https://en.wikipedia.org/wiki/Single_operator_two_radios ) and single operator, two VFO (SO2V) contesting as well as both assisted/non-assisted classes of participation.

Despite the changes that have occurred, the operator is still the focus and the primary limitation to performance.

Ron has some tips If you are new to contesting or just thinking about getting into it.

1) Know the rules (of this contest), the exchanges, the multiplier lists, the propagation patterns and expectations.

Continuing, Ron says:
2) Know your equipment and software. By that he means to make sure you have the proper devices and software for this specific contest. Then make sure they are well maintained and all up to date. That means firmware as well as software. Remember, your radio has firmware that needs updating also, not just your computer.  And have spares, if possible.

Additional tips:
3) Despite what many would say, these are sporting events. So, your physical and mental condition is going to play a big part in how you do.  Be well rested, fed, and stay hydrated.  Caution, do not overeat and stay away from adult beverages, as both can make you sleepy.  Plan your rest periods to fit in with low activity and/or reduced propagation. 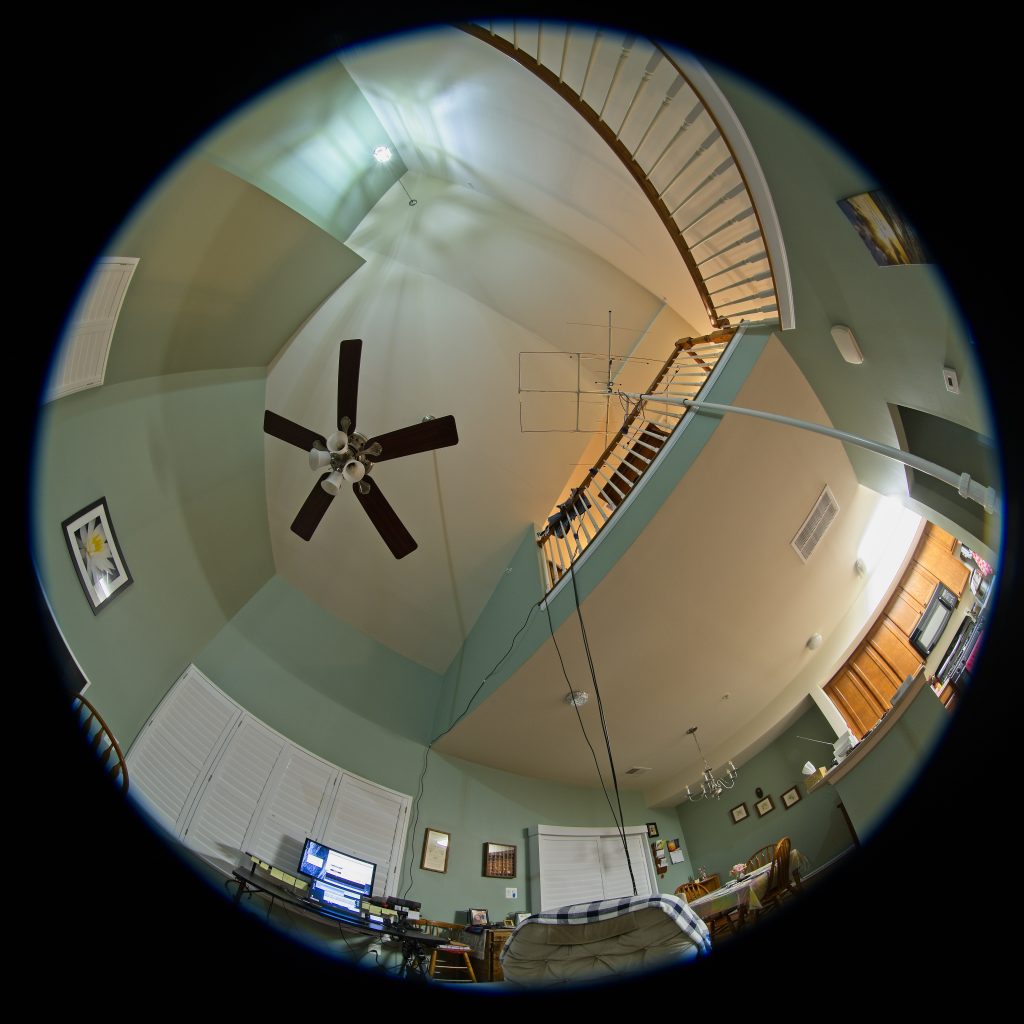 Setting goals will do two things:
i) it gives you a yardstick by which to measure your performance at any point in the contest
and
ii) it defines a pace and schedule for your activity.

Design a band plan to maximize your scoring potential.

Practice sending the exchange when you have spare time (traffic jams).

Have a second receiver monitoring conditions on your next bands.

In closing, why does Ron contest?
“Contesting exercises my ability to communicate under less than optimum conditions.  Radio sport expands my operating performance. True confession, I passed the Amateur Extra 20 wpm code test in December 1963, less than two weeks after I had operated in the ARRL CW Sweepstakes contest (it was two weekends then). I am certain that I would not have made it without that recent contest practice.

Finally, contesting is FUN.  So, if you aren’t a contester, test the waters. If you are already into the action, set up your goals and see what you can really do.” 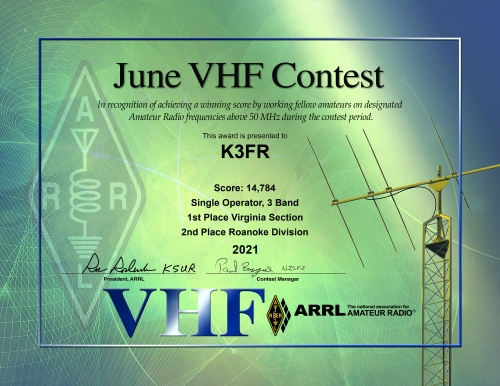