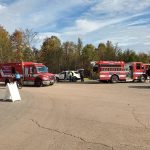 On October 23rd, the Ole Virginia Hams wrapped up its support for the 24th Annual Tri It Now season with its eponymous Tri It Now “SEASON WRAP UP”.

There are normally 6 events per season occurring either on a Saturday or Sunday. The OVH usually fields 5 to 8 volunteer spotters. That is, we are there to provide eyes, ears & communication support throughout the event. Normally, we spot riders with broken down bicycles and riders who haven’t trained enough, so they are suffering from sore limbs. I myself took one rider with ankle pains & his bike which had 2 flat tires (related perhaps?) in my truck back to the finish line. In short, usually nothing serious happens.

What many of you do not see is that Ina, the event coordinator regularly calls out and thanks the W4OVH Ham Radio club and its volunteer operators at the morning briefings that she holds prior to each event to the event participants and that the participants regularly show their appreciation and applaud the W4OVH club and volunteers for their service to this event.

The race was scheduled to begin at 0845. This is a later start than normal due to the fact that it is getting lighter later in the morning and the scheduling of the pool is last instead of first due to the increasingly cooler air.

We run a tactical net and our primary mission is eyes on the course to provide safety. In the event of an emergency we are to call 911 and THEN notify our Net Control via radio. We are to use the word “EMERGENCY” then describe event that happened (person fell, fainted, not feeling well, etc.). We are to never use the racers name, only use their bib number (their race number).

Sunday however, we unfortunately experienced a fallen bike rider that needed 911 support. Our ham radio operators on the course made a tremendous difference, since the fallen rider fell on one of the distant unseen portions of the course. Had there been no ham operator present, she would not have been attended to as quickly as she was.

George Mason had no standby medical help available. However, Erik, K4SOK responded. Erik has extensive first aid training as a first responder from his days as a building engineer and working at Reagan airport. He and his young son Diego left their checkpoint and came to the injured woman. Erik always carries a medical bag in his vehicle.

Erik assessed the woman and called 911. He stayed with the 911 call while his son held the phone. He made sure that 911 had “dispatched’.

Additionally, the George Mason police also arrived at the scene and provided a pillow so her head was off the asphalt.

The 911 call had an impressive response. In rolled a fire truck, 2 ambulances and 2 police vehicles in short order.

There were plenty of paramedics and Erik stayed by the woman’s side as they worked on her.

She was eventually put in one of the ambulances and transported to Prince William Hospital.

After consulting with the George Mason police, Erik loaded her bike and helmet and visors to his vehicle and took them to The Freedom Aquatic & Fitness Center front desk so she could claim them later.

A special thanks to Erik Sokolowski, K4SOK, who performed as a first responder, along with John Heartney, KG4NXT, and Al Dugas, KB4BHB, for their prompt response and coordination of EMT/Medical/police support.  I am confident that the fallen rider was transported and was able to be safely released after some attention to their treated wounds.