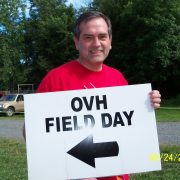 Thanks to Rosalie Fuller for these additional W4OVH Field Day 2017 photos. The Field Day was held at the Nokesville Community Park pavilion and a good time was had by all.  As you can see, Chef Phil put on an excellent spread of food for his most excellent dinner that kept everyone well fueled throughout the 24 hour operation from Saturday, 24 June through Sunday, 25 June 2017.

This is a short follow up to the recent article posted by John Heartney, KG4NXT, regarding the working of the 4th of July Independence Day “The Original 13 Colonies Special Event. John was kind enough to provide us with a image of his earned certificate for the special event. A number of our Ole Virginia Ham club members worked the Original 13 Colonies special event and earned the respective certificates.  As Kevin Utzy, KX4KU responded, Got mine too plus two qsl cards.  Only difference between yours and mine is you have NRA endorsement, so we will go with yours!  🙂 The Ole Virginia Hams Amateur Radio Club is fortunate to have members that enjoy working or even hosting events like Terry, KC4DV (Eclipsepedition 2017), and sharing the information with the rest of the club. 73, Andy KJ4MTP

SUNSHINE CORNER Happy middle of the summer Birthday wishes for: Steve / KB4OF, Ken / WB4ZOH, Philip / KI4WGC, Jeff / KB4TT, George / K4GVT, Michael / KC4ZNQ, Sandy / KM4JUS, Dwight / N4GSD, Bob / KI4IST, Mary / KK4GOW, James / AA4KG, Jeff / K9VEG, Richard / KJ4ZIH, Luther / WA3FMO and Tony / KK4YZK. Congratulations to the whole OVH club for a great participation during June – which is always the busiest “ham” month of the year for the club! Hamfest, meetings, Mini-Tri, Field Day, these events would not have been so successful if so many club members did not actively participate; during June, you all came out in great numbers. Thanks to everyone including the Chairperson for each event! Special thanks to Phil / AC4PL for feeding everybody at during Field Day, master chef Phil again did a tremendous job, certainly no one… Read more »

PRESIDENTS LETTER: I hope that everyone is surviving the summer heat… Well, we have gone through another successful Field Day. At least the weather cooperated with us this year. I am looking forward to hear all of the scores. I want to thank all who took part in this fun event, it was great to see the folks who only make it to a couple of events a year. As a surprise, Terry (WA5NTI) made an appearance, even though it was a short one, it was good to see him. As always, hats off to Phil, with another awesome spread of delicious food!! And then there was the epiphany that Byron had……. Even though the Fourth of July evening was rainy, many places still had firework to celebrate this wonderful country of ours. I hope that many OVH members participated… Read more »

VP’s Corner Jeff Fuller WB6UIE Well done to Byron, AK4XR, and his team for a very successful Field Day. We had a good turnout, the weather was nice, and the food superb. If you’re interested in getting involved with amateur radio public service activities, upcoming events like the Mini Triathlons are a great place to get your feet wet. Keep an eye out for Andy’s posts for more info.  For those with more experience, the Prince William Half Marathon and Marine Corps Marathon will be here soon. Polos are here!  For those who were part of our second order, I’ll have your OVH club polo at the next meeting.  If you would like a polo but weren’t on the list, I’ll also have a number of basic (no name or callsign) club polos for purchase. Our program for the July… Read more »

Eclipsepedition 2017 I am mounting an Eclipsepedition August 21 to Lexington SC.  Special Event Call Sign W4E has been requested. The center of Solar Eclipse Totality passes directly over Lexington.  Eclipse QSO Party, HF Operation will be from a Public Parks or School. Planned Operation is from 11:00am to 4;06 EDST, details to follow. Checking Travel Velocity, I found a Limited number of budget Hotels in the Columbia Lexington area. Aiken SC currently has the best availability of Business Class rooms and Suites. I booked a room at the Aiken Hampton Inn for $84.  Aiken is only 45 miles from the Eclipse Totality Center. Planned operation is on 20 meters and 40 meters. I provide the rigs and antennas.,  I encourage everyone travel to Lexington SC to witness the 2017 Great American Eclipse The last American Transcontinental pass was in… Read more »

13 Colonies Special Event 1300 UTC on July 1 until 0400 UTC on July 7 OVH was well represented in the 13 Colonies special event.    I probably do not have a complete listing but wanted to recognize those who I know about.  The object of the  13 Colonies special event is to contact designated stations in each of the original 13 colonies.   Each State has it own special 1 by 1 call – Virginia was K2B. I believe the following stations had a “Clean sweep” : Al, KB4BHB,  Byron, AK4XR,  Terry,  KC4DV, and Gil, KM4OZH.   Other club members participating were John , KG4NXT,  David, KK4ZUU,  Kevin , KX4KU, and Wayne N7QLK.   Some of the members were actively sharing spots on the difficult to work stations. Our own David, KK4ZUU, was one of the official Virginia stations – K2B.    David went out… Read more »