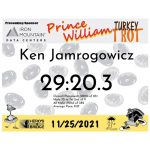 November 25th, Thanksgiving morning was another beautiful day for a race. A 5k race to be specific. While a cloudy day, it was an above average 60° with low humidity. Perfect.

First off, and most importantly: Congratulations to our own Ken (KE2N) who not only participated in the race, he placed 2nd in his category. As he told me later, “ …. a post retirement personal best.” 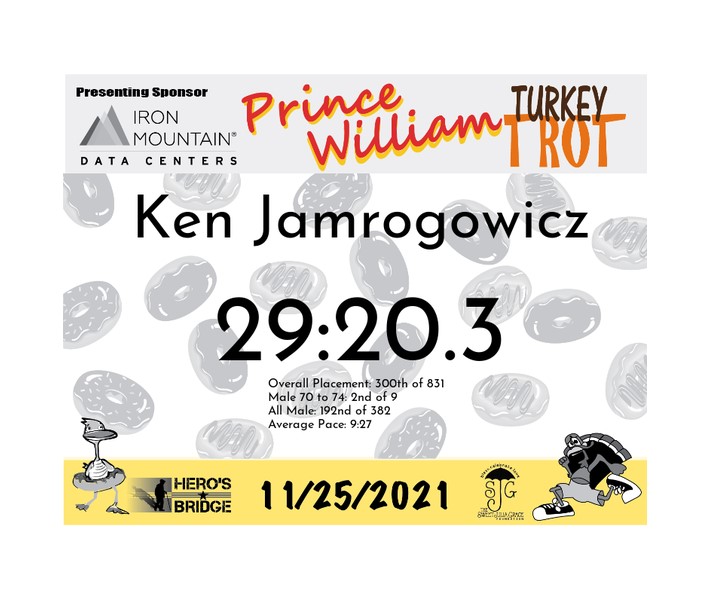 Next up, what a difference race management makes. Our own Wayne (N7QLK) took the lead here, but he was frequently thwarted by the race’s management.

Wayne organized his team of spotters – Wayne, N7QLK; Al, KB4BHB; Ken, KN4DD; Theresa, KG4TVM & John, KG4NXT only then to have the race’s management to drop off the face of the earth.

Despite repeated attempts of contact before the race, he was ignored. On the day of the race, Wayne was provided a map of the race for the first time. He was given the map 5 minutes after he deployed his team. This resulted in Theresa being deployed at first, outside of the race course.

Semper Gumby – Always Flexible. The OVH team adapted and overcame. Theresa was redeployed. However, it is important to stress that Wayne & his team inherited a neglected situation. What a difference compared to the other races the OVH has supported.

The race itself went off without incident, I’m happy to report. It started @ 8:34 AM & was over by 9:25 AM. The participants made it was a very colorful event. Many times, it looked more like a Halloween 5k, there were that many costumes.

We had a number of people in turkey costumes – a full furry brown pajama suit, complete with colorful wings, tail & a head mask. We also had a couple of “brides” and a number of people in what looked like strawberry hats. I don’t know why. Even some of the children were in costume. “Princesses” in full body suits complete with adorable tutus were popular, and there were a few “cowboys” also.

And some photos by Theresa, KG4TVM:

Lastly, while there, John, KG4NXT, made friends with a civilian, Sydney. She agreed to send John her photographs. I’ve received 56 photos from her & collated 14 of those into a gallery of her own, below.