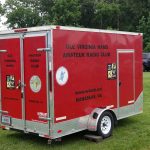 With the weekend behind us, it is time to look back at our Tailgate Party 2021.
If this event had a motto, it probably would have been Semper Gumby (Always Flexible).

The planning committee had to work around the coronavirus restrictions for places to have our event and to even have in person meetings. But we powered through.

The week of the event was an eventful one weatherwise. The days immediately before the event were rain soaked. But we adapted.

There was a great deal of planning by many individuals before the event and as you would expect, on the day of the event, real life happened.

We thought we were onto something with our event, because of the level of interest we generated before the event: webpage comments, emails and even phone calls. Our flyer said we would run from 8 AM till 2 PM.

Almost immediately vendors and potential vendors started contacting us asking if they could set up earlier. Many indicated it would take at least an hour for them to set up.

So, we changed our rules and said to the vendors you can come at 7 AM.

On the day of the event both vendors and spenders began arriving at 6 AM.

We had plenty of volunteers for traffic control, but because of the early hour, they were still a bit sleepy. It was a bit of a crisis because the coffee machine broke.

Again, we adapted. Gil, KM4OZH was able to fix the coffee machine, which in turn fixed the volunteers. We directed incoming traffic to the proper helpers who directed to the parking locations. It now worked like a well oiled machine.

After around 2 inches of rain in the previous 48 hours we caught a break weatherwise. The drainage of our field was first rate. We didn’t develop mud & no person or vehicle got stuck.

While it remained overcast for our entire event, it was cool, around 75°. Additionally, there was no humidity. This ensured that most of our patrons were comfortable temperature wise, although a good number of sweaters and sweatshirts were observed.

All photographs in this article are from George, K4GVT, and used with his permission.
A big thank you to George.
Additionally, George has a drone video at https://youtu.be/F5x0_g-FySM

Drone photographs can be seen immediately below. 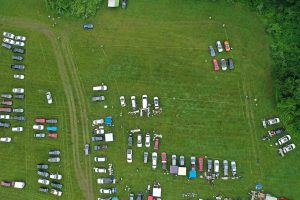 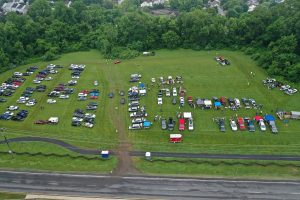 There were other photographers out at our event, and if you have photos you wish to share, both George and I would love to have copies of those photographs, separately.

The OVH members we have spoken with concur that our Tailgate Party was a success. It was our first Tailgate Event and all in all, it went pretty smoothly. Given the bad weather, and the uncertainty of the clouds overhead we, as an organization, did well. The event peaked around 10:30 AM and then started winding down. The last of us left about 12:30 PM.

Speaking of the snack table, it was a lively place with one young man doing much of the work. 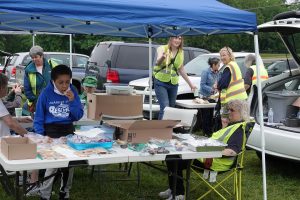 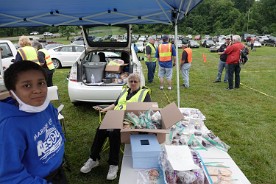 DJ, please take a bow, you’ve earned it. This young man worked very hard and was pleasant during the entire event. A huge task given his age. I certainly would not have been as gracious all day long as he was.

Kudos to everyone involved.

4 thoughts on “Tailgate Party in lieu of Hamfest 2021”